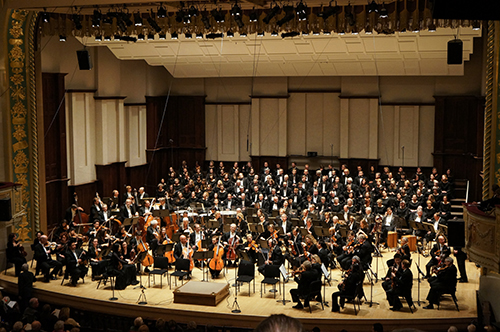 The Detroit Symphony Orchestra has debuted a new robotic camera production system — the first in the nation — used during its Live From Orchestra Hall program, to enhance the “patron experience” for viewers watching on the DSO’s website.

Used for the first time during a webcast last Saturday, the cameras, the size of a coffee maker, are controlled remotely from the basement of the Max M. Fisher Music Center, allowing engineers to pre-program hundreds of shots based on the instruments and musicians highlighted in a particular score.

The smaller cameras allow for a more intimate view of the performance, says Gabrielle Poshadlo, spokeswoman for the DSO. “The robotic cameras can get closer and offer more angles without being intrusive to the musicians,” she says.

“Webcasts are now a part of the DNA of this organization,” says Scott Harrison, executive director of digital media for the DSO. “Making sure we stay on the forefront of the classical music streaming trend is part of what makes us the most accessible orchestra on the planet.”

The next webcast, to premiere at 8 p.m. on March 28, can be watched live at dso.org/liveandpbs.org. The webcast will also reach radio audiences in Chicago via 98.7 WFMT.