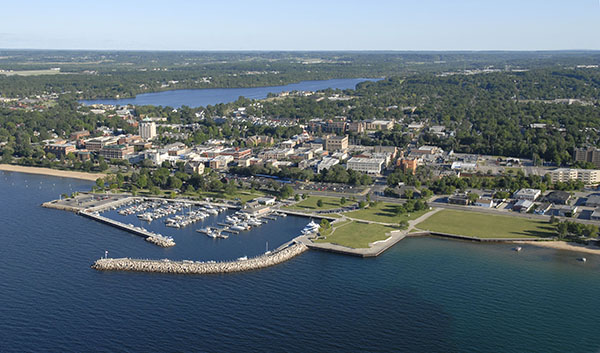 A $2 million hotel renovation, a Mexican restaurant, and a vineyard and winery are among the new additions to Traverse City that are expected to increase tourism and leisure travel.

“It’s certainly true that the knowledge that there’s something going on in Traverse City does bring people in,” says Mike Norton, media relations manager for Traverse City Tourism. “The main attraction here in the summer time is always going to be the beaches and the outdoors, but the restaurants, wineries, and hotels always help a lot.”

Based on the number of hotel bookings, he says the summer is expected to be a record season in the city.

A new wine bar, Olives & Wine, will open this summer in the Corner Loft building, located at 201 E. Front St., and offer Mediterranean small plates and mezze platters, along with 56 different wines available by the glass.

Later in the summer, Edany Bistro will reopen with an added dinner menu at 317 E. Front St.

Earthen Ales, a 10-barrel microbrewery, is scheduled to open in late summer or early fall in the Village at Grand Traverse Commons, located at 830 Cottageview Dr. The new brew house will be located in a recently restored building at the western edge of the property, and will have 100 seats, an outdoor patio, and six to eight taps on draft to start.

Italian restaurant PepeNero is moving to a newly restored kitchen site below Kirkbride Hall, located at 700 Cottageview Dr. The new location will feature a spacious dining room and an expanded lounge area.

Northwest of downtown, the owners of Apache Trout Grill are opening The West End Tavern in the former Harbor 22 building, 12719 W. Bayshore Dr, which overlooks Harbor West Marina. The menu at the tavern will feature some items from Apache, along with wood-fired pizzas, a full-service bar, and more.

On the wine front, Rove Estate Vineyard and Winery has opened west of downtown. Located at 7007 E. Traverse Highway, Rove has an outdoor wraparound deck at a 1,100-foot elevation. The estate is open from 11 a.m. to 6 p.m. Monday through Saturday, and 11 a.m. to 5 p.m. on Sunday.

Meanwhile, the West Bay Beach Resort Hotel, 615 E. Front St., has expanded its bay view patio by 2,200 square feet. The resort also created a private patio area under its willow tree that can be booked for private groups.

The former Best Western Four Seasons has been renamed the Best Western Plus Traverse City, a designation that reflects several property enhancements. The hotel, located at 305 Munson Ave., reopened in early September after an eight-month renovation.

The Traverse City Courtyard by Marriott has completed a $2 million top-to-bottom renovation, including new mattresses, new carpeting, and new furniture with a modern flair.

“It’s always important, particularly in a resort or tourism-dependent area, for hotels to constantly be upgrading their facilities, renovating, and to some extent, freshening things up,” Norton says. “It’s a sign that things are going well.”