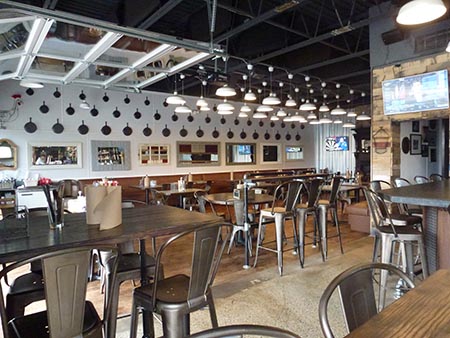 “We wanted the restaurant to be a reflection of the local neighborhood and lifestyles of the residents of surrounding communities,” Grandon says.

The menu includes barbecue sandwiches consisting of meat that has been smoked in-house using Michigan apple, cherry, maple, and oak woods; platters that feature smoked brisket, sausage, and ribs; and burgers cooked on a griddle and served with fries. Other comfort foods include buttermilk-fried yardbird, or chicken; smoked salmon filet; macaroni and cheese; and fried green tomatoes.

“Yardbird … was created out of diners’ preferences for a more back-to-basics culinary experience, without sacrificing quality and sophistication,” says Grandon, a station chef at the former Tribute in Farmington Hills. “It’s all about serving great food, simply prepared, accompanied by a modern, down-to-earth beverage selection, in an atmosphere that is both easygoing and cool.”

What’s more, a custom-branded vintage bicycle will be used to make local carryout deliveries starting next summer. The bike, which is parked on a rack, includes space for customers’ bikes.