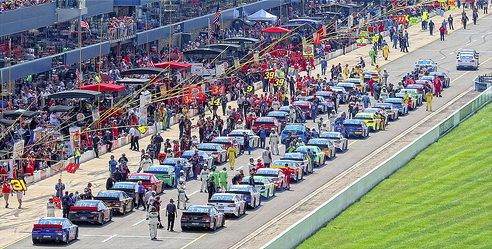 For the first time, fans attending the two NASCAR races at the Michigan International Speedway in Brooklyn this summer can buy a pass to stand on the track during driver introductions, take photos with the winner’s trophy, and view cars close-up.

“We are excited to allow fans the opportunity to purchase a Driver Introduction Pass,” says Roger Curtis, president of MIS. “As a staff, we are afforded great experiences as part of our jobs and we want to pass those memories onto our fans that make race weekends unforgettable.”

Fans attending the Quicken Loans 400 in June and the Pure Michigan 400 in August can purchase a pass that will offer them the chance to stand on the front stretch, the section of the race track between the fourth and first turns, where the start/finish line is located. The pass also allows fans to sign the start/finish line, take a photo with the trophy, and view cars during pre-race preparations.

In addition to the Sunday races, MIS will host the Corrigan Oil 200 ARCA Racing Series on June 12, NASCAR XFINITY Series on June 13, and the Camping World Truck Series Careers for Veterans 200 presented by The Cooper Standard Foundation and Brad Keselowski’s Checkered Flag Foundation on Aug. 15.