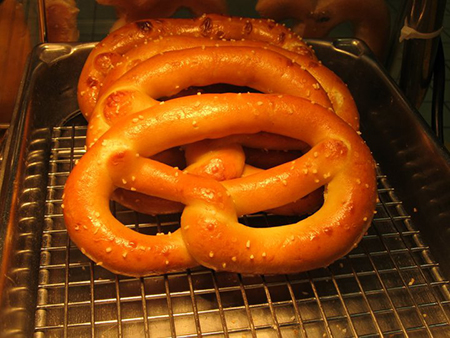 The new owners of The Pretzel Peddler in Clarkston intend to double its number of locations throughout southeastern Michigan to 12 by the end of next year and then grow the mall-based business nationwide.

“The economy is improving, and we want to take advantage of that,” says Lawrence Awdish, president of The Pretzel Peddler, which has units in Macomb Mall in Roseville, Oakland Mall in Troy, Southland Center in Taylor, Genesee Valley Center in Flint, and Westland Center in Westland. “We’re looking at a rapid expansion.”

The business — which sells original-style, Bavarian pretzels — isn’t just looking for potential sites in malls, Awdish says. “We’re in talks with one of the largest retailers in the world to put locations inside their stores.”

In the meantime, the company will work on renovating its current locations to look more like the recently remodeled Southland Center store. All kiosks will be moved to inline stores, and some locations will be redesigned as Pretzel Peddler Cafes, complete with a coffee offering and a revamped menu.

With nearly 60 employees chainwide, The Pretzel Peddler will soon begin offering more pretzel-dog and flavored pretzel options. The business also hopes to add a pizza item to its lineup by the end of the year, Awdish says.“I don’t want to give away too many details just yet, but it’s something that’s very popular outside of the U.S. right now.”

Awdish says his confidence in the chain stems from its history. “The former owner (Vito Guida), the one that started the company, had been there since 1971.”

Paul Lichtenberg of Colliers International represented both the seller and buyers in the stock sale of the company.