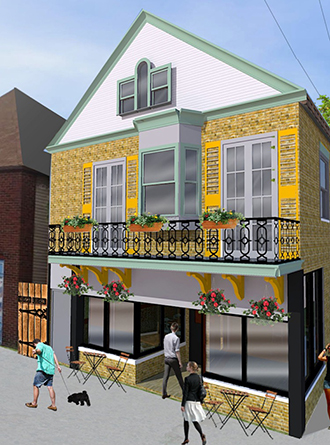 “I want the experience to be something memorable, something fun, good food, and a good draw of people,” says Dameon Gabriel, founder of the venue. “When you go to New Orleans and go to an event, it’s so mixed up. Everybody’s there just to have a good time no matter what color, creed, or background, and that’s the same thing I want to give with Gabriel Hall.”

The hall, to be located at 8002 Kercheval St., will include a restaurant, a bar, and a live entertainment area on the first floor. A special event space and a museum paying homage to the Gabriel family and its contribution to jazz will occupy a second level.

A saxophonist, Clarence Ford Sr., Dameon’s cousin, performed with Fats Domino, a pianist and singer-songwriter, while Charles Gabriel is a prominent clarinet and saxophone player. The Gabriel family migrated to Detroit from New Orleans in the 1940s.

(Dameon) Gabriel, a fifth-generation musician, first conceived of the idea for the hall in 2013 after participating in different Mardi Gras events with his jazz band, The Gabriel Brass, in Detroit.

“I think the Gabriel family and what they’ve brought to Detroit should be preserved,” Gabriel says. “It should be treated as a jewel, and this is a place where people who don’t know this history can learn it, and it won’t die.”

Gabriel and his team are working with Virtuoso Design + Build, a Detroit-based architectural design firm, to develop the blueprints and 3-D models for Gabriel Hall. Gabriel says guests can expect the space to be modern with a New Orleans-inspired vibe.

The construction and build out of Gabriel Hall will take place over the next year after the design of the building is finalized.