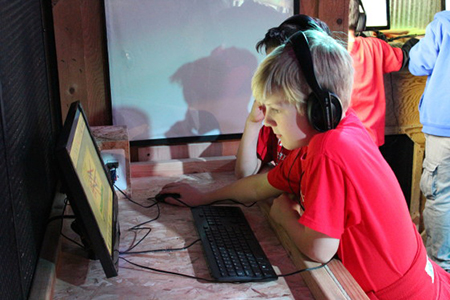 The Michigan Science Center in Detroit has opened an exhibit that offers museum visitors the chance to compose their own musical creations through a new software program that uses computer-based visual language to create music.

The exhibit has three workstations where visitors can create a two to five minute song using colors and shapes. The compositions will be submitted to Tod Machover, the creator of the software, for possible inclusion in the Detroit Symphony Orchestra’s “Symphony in the D” project, a collaborative effort that asks the public to supply sounds that will be incorporated into a final musical work about the city of Detroit.

Anyone can acquire the software at hyperscore.com and submit their compositions from home. Detroit residents also can access Hyperscore at no cost by submitting three or more Detroit sounds via the “Symphony In D” mobile app.

“I am especially delighted that the Michigan Science Center will make our Hyperscore composing software easily accessible through this new exhibit, so that anyone … can contribute a personal piece that captures some aspect of Detroit,” says Machover, a composer and musical innovator using technology.

“Symphony in D” is scheduled to premiere at Orchestra Hall at the Max M. Fisher Music Center in Midtown on Nov. 20-21.