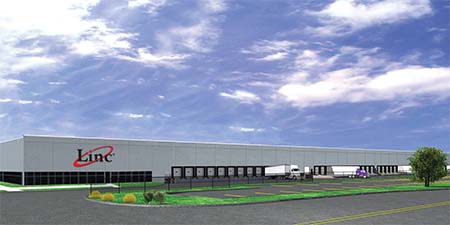 Linc, a Warren-based logistics services company, will open a new facility at the I-94 Industrial Park on Detroit’s east side, bringing 150 jobs to the area, city officials announced at a press conference today.

“More companies are interested in opening and expanding in Detroit and we are starting to see them come to fruition,” says Detroit Mayor Mike Duggan. “This new development is creating significant employment opportunities for Detroiters in an area of the city where jobs are needed the most.”

The new, 500,000 square foot logistics facility will provide services to automotive industry OEMs. Linc’s parent company is Warren-based Universal Truckload Services. The project was financed and developed by Warren-based Crown Enterprises, which is owned by the Moroun family.

“As an employer with a long history and involvement with the city of Detroit, we’ve set a minimum target of 51 percent of these jobs going to Detroiters, but eventually we’d like to see all of these jobs held by Detroit residents,” says Jeff Rogers, CEO of Universal Truckload Services.

Rogers says the jobs will be filled between the fall and early 2016.. Details on two job fairs will be held in the coming weeks.