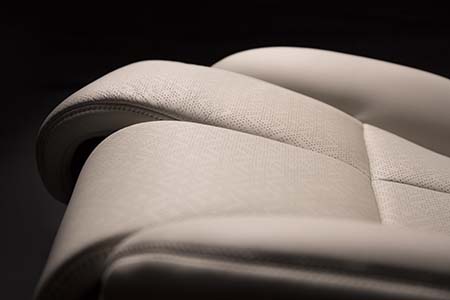 Dearborn-based Ford Motor Co. today released details about the seats in the Lincoln Continental Concept, which can be adjusted 30 different ways — and will include a massage function.

“The new design of the Lincoln 30-way seats goes beyond the one-size-fits-all design seen in the past,” says Johnathan Line, advanced seat innovation supervisor and technical expert for the Lincoln Continental. “It conforms to your body and supports it in ways not previously possible.”

Line says Lincoln seat engineers studied first-class and private airplane seats for possible applications. He says the suspension system of plastic and foam flexes around the body, which he says helps to relieve stress on the shoulders and neck. Line says the seats provide support to the lower body and legs with two extending thigh cushions that are independently adjustable. The cushions can also move up and down.

The redesigned Lincoln Continental will hit the market next year. The full-size sedan will feature a centered chrome grille, doors that open with the touch of a button, and LED head lamps.

IN RELATED FORD NEWS, an all-new Ford Focus RS featuring an exterior designed by players of Forza Motorsport for Xbox was unveiled ahead of the international 2015 Gamescom event in Cologne, Germany.