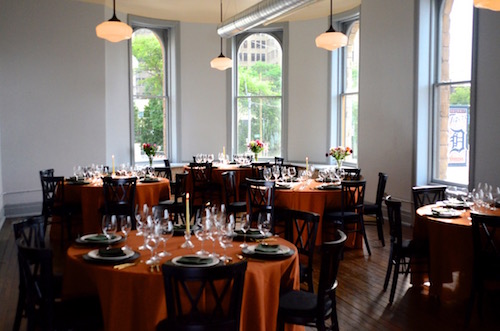 A new event space called Castle Hall has opened on the second floor of the Grand Army of the Republic (GAR) building in downtown Detroit and is now taking reservations.

Food options include fare from Republic Tavern, which offers seasonal dishes on its menu, or one of Castle Hall’s selected catering companies such as Forte Belanger. Capacity is 120 people for a seated dinner and 140 people for a strolling event. In addition, given the building sits on a triangular lot, the space offers panoramic views of downtown Detroit.

“It is a unique space that offers a unique environment and experience to anyone that wants to have an event here. We will follow the precedent set here by Republic and Parks and Rec as far as service and experience,” says Tom Carleton, one of the three owners of the GAR building and a principal at Mindfield.

Franke says Castle Hall was named after the castle-like design of the GAR building, which was built as a memorial to Civil War veterans in 1899.

Brothers Tom and David Carleton and business partner Sean Emery acquired the building in 2011 for $220,500 from the city. Along with building out space for the four-story building’s restaurants, event, and office facilities, the work included new, state-of-the-art electrical, plumbing, and HVAC systems.

For more information or to make a reservation, visit castlehalldetroit.com, or contact Franke at amanda@republictaverndetroit.com.