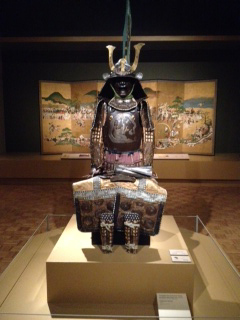 The newest exhibit at the Detroit Institute of Arts that opens Sunday, shares the history of the Japanese samurai through more than 125 works of art, ranging from suits of armor and sword blades to tea ceremony objects.

As part of Samurai: Beyond the Sword — which projects the image of the samurai as fierce warriors as well as patrons of the arts and sophisticated artists and scholars during the relatively peaceful Edo period (1603–1868) — the DIA will offer a variety of related programs, including a Japanese tea ceremony, bunraku-inspired puppets, performances on traditional Japanese instruments, and a number of films at the Detroit Film Theatre.

Birgitta Augustin, the DIA’s associate curator and acting department head, Arts of Asia and the Islamic world, and exhibition curator, says the exhibit in Detroit is more than double in size and scope than past showings. In addition to showing the samurai’s relationship between the military and the arts, the exhibit includes several objects that are being shown in the western world for the first time.

Bruce Brownlee, senior executive administrator for external affairs for Toyota, one of the central sponsors of the exhibit, recalled growing up in Japan from 1953-71. “I recall my youth when I was pretending to be a samurai warrior fighting justice for whatever cause it was,” he says.

The exhibit runs through June 1 and is based on the traveling exhibition Lethal Beauty: Samurai Weapons and Armor, from the collection of the Clark Center for Japanese Art and Culture. A special preview will be held to DIA members Friday and Saturday. Tickets for the general public are $16 for adults and $8 for ages 6-17. For more information, visit dia.org or call 313-833-4005.