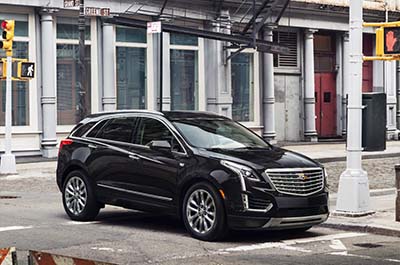 Cadillac today announced its new XT5, a midsize luxury crossover, will arrive in U.S. dealerships in the beginning of April with a price tag starting at $38,995.

“The arrival of this sophisticated new crossover positions Cadillac well, as XT5 enters the most popular segment in the global luxury market,” says Johan de Nysschen, president of Cadillac. “It’s pivotal to our ongoing growth, which is why we’ve developed XT5 from the inside out to provide customers more space, more technology, more luxury, and more efficiency.”

The XT5 is the first in a series of upcoming luxury crossovers carrying the XT designation. The XT5 will offer seven exterior colors as well as seven distinct exterior environments. The 2017 XT5 has a 3.6-liter V6 engine, which debuted on the ATS and the CTS. The engine produces 310 horsepower and 270 pounds per feet of torque.

In addition, the XT5 has an eight-speed automatic transmission and an electronic precision shift, the first electronically controlled transmission shifter application in a Cadillac. The XT5 also features stop/start technology, and offers an optional twin clutch all-wheel drive system capable of transferring up to 100 percent of available torque to either the front or rear axle.

The XT5 is available in four trim levels. The highest level, called Platinum, is priced starting from $62,500.

The 2017 XT5 is being built at the Spring Hill, Tenn. assembly facility near Nashville.