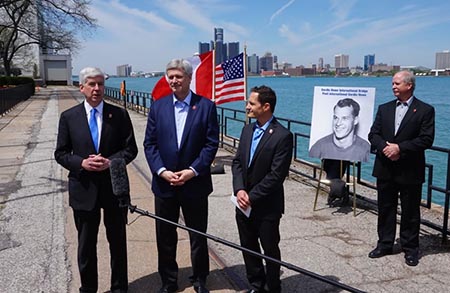 The New International Trade Crossing, a bridge scheduled to be completed by 2020 connecting Detroit and Windsor, will be named after the Detroit Red Wings legend and Canadian-born Gordie Howe.

“What an inspiring name,” says Gov. Rick Snyder. “Gordie Howe represents great things for both Canada and Michigan. He’s a Canadian who spent so much of his career in Detroit.”

Known as Mr. Hockey, Howe, 87, is immensely popular in both Detroit and Windsor. He played for the Detroit Red Wings for 25 seasons.

“This bridge represents a strong and important relationship between Canada and Michigan,” says Canadian Prime Minister Stephen Harper. “There’s no better person to symbolize that relationship than Gordie Howe.”

In 2012, Gov. Rick Snyder and Canadian Prime Minister Stephen Harper made an agreement to finance the bridge, a move that bypassed the Michigan Legislature. There has been opposition to the bridge, which will compete with Manuel “Matty” Moroun’s Ambassador Bridge.

The New International Trade Crossing, including the Canadian and U.S. inspection plazas, the bridge, and the interchange with Interstate-75 and the Windsor–Essex Parkway, is estimated to cost between $3.5 and $4 billion. Canada will provide $550 million in financing (Michigan bears no liability for any costs), which will be paid through tolls.