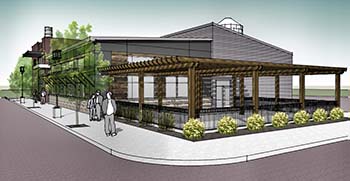 Ted Gedra, owner of Ludington Bay Brewing, says the 8,000-square-foot brewery, to be located at 519 S. James St., will have a production capacity of up to 3,000 barrels annually set next to a taproom with a 1,400-square-foot patio.

“(The brewery will be) near where the car ferry comes in (from Manitowoc, Wis.) and it’s also near the marina — South James Street (which) always had a lot of appeal for me,” Gedra says. “In the history of Ludington, it was at one time one of the most bustling parts of the city.” 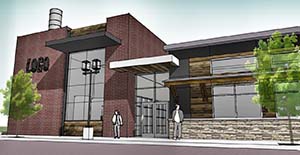 He says the brewery will offer a selection of about 10 different beers, including IPAs, pale ales, wheat beers, and porters, among other types.

“(The beers will be) fairly straightforward, with some seasonal beers and wheat beers where we’ll add some flavors, but we’re going to do fairly straight representation of beers that have been around for a long time,” Gedra says.

He says the menu will complement the beers, with a focus on grilled items and thin-crust pizzas “designed to save room for beer.” Other menu options include a variety of appetizers, soups, and sandwiches.

The 1,800-square-foot taproom will feature brick accents, a nod to the historical buildings in the area, along with metal accents to give it a more industrial feel.

“We’ll also do a little bit of a nod to the up north area and use materials like recycled barn wood,” Gedra says.