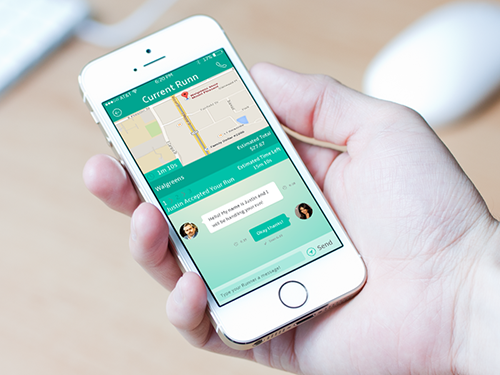 Starting this summer, college students who lack access to transportation can access an on-demand delivery service via an app. Offered within a five-mile radius of a given university’s campus, once a merchant fulfills an order, a runner, or an independent contract worker hired through Runn, will pick up and deliver the order.

“I go to Central (Michigan University in Mount Pleasant), and I just got tired of not be able to have things that I wanted, when I wanted them,” says D’Andre Ealy, co-founder and CEO of the Runn app along with Wayne State University students Rodney Gainous and Jordan Jackson. “(Shopping) isn’t really accessible to students unless you have a car, and if you do have a car, there’s an inconvenience factor involved.”

Ealy says the trio plans to launch Runn at Michigan State University, Wayne State University, and Central Michigan University, allowing only users with an .edu email address to sign up for the service. Each delivery will cost $3.99 per run, and a “rush membership” will allow a person to pay a set annual fee to receive an unlimited amount of deliveries during the year.

Last year, the trio launched Follow, originally called RealTwiends, which has more than 70,000 users, Ealy says. “Follow is a Twitter application on the Android market that tells you who’s following you on Twitter, who you’re following, and who you’re following that’s not following you back. We recently rebranded and re-launched it and did all of the updates, so we’ve been getting hundreds of downloads a day,” Ealy says.

While Follow is a free app, Ealy says Runn will generate money through delivery fees and credit card transactions. On Monday, the startup launched an Indiegogo campaign in an effort to make Runn’s user interface more compatible and user friendly, although the program’s initial launch is not contingent on the campaign’s completion.

Meantime, Ealy says the startup is currently looking for runners, developers, and merchants to participate in the service.