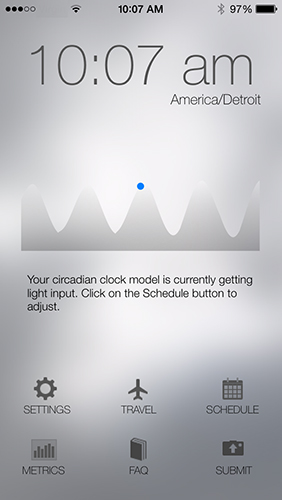 “Overcoming jetlag is fundamentally a math problem, and we’ve calculated the optimal way of doing it,” says Danny Forger, a mathematics professor at the U-M, who worked on the project with undergraduate student Kirill Serkh. “We’re certainly not the first to offer advice about this, but our predictions show the best and quickest ways to adjust across time zones.” Serkh is now a doctoral student at Yale University.

Called Entrain, the app is based on the principle that light — particularly from the sun — has the greatest impact on the regulation of a person’s circadian rhythm, or biological clock, especially when time zones are crossed in rapid succession. When people are exposed to light and darkness outside of their normal routine, it often leads to reduced levels of cognitive awareness as well as grogginess and mood swings.

To use the app, a traveler starts by entering the typical hours of light and darkness in his or her current time zone and then chooses which time zone he or she is traveling to. The app then offers a custom schedule that indicates when a person should seek out the brightest light possible and when they should expose themselves to darkness or, at least, dim light.

The app works via a series of alerts. For example, a user may be directed to go outside for their prescribed time of sunlight, or a therapeutic light box will do the trick. In the case of darkness, sitting in a dim lit room will work. The app alerts help the body adjust to time differences faster than it would normally do naturally.

A study about the research was published earlier this month in the Public Library of Science Computational Biology.