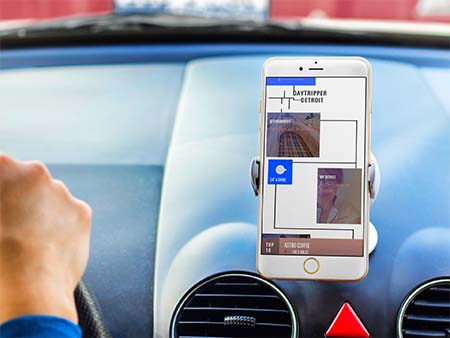 Daytripper Detroit, a new app released today, not only features recommendations for restaurants and bars, but also provides interviews with city entrepreneurs along with ideas for exploring the city.

“The great thing about this app is that you don’t have to go to several different sources,” says Tim Tolbert, of Harbor Springs, creator of Daytripper Detroit. “It’s like the Eater coverage, Thrillist, and Yelp all rolled up into one. So if someone is downtown and they’re at a loss as to where they want to go (for entertainment), rather than having to do a bunch of research, they could just fire up the app and they would have a curated look at Detroit, anything from what museums to go to, to what are the hottest restaurants.”

Tolbert also developed the app Doughbot – Find Doughnuts Nearby!, which helps users find the nearest doughnut shop. The app was featured in the LA Times, The Guardian, and New York Magazine, among other publications.

Tolbert says the free Daytripper app offers interviews with 10 Detroit entrepreneurs, including Phil Cooley, who co-owns Slows Bar BBQ and is the founder of Ponyride, which provides inexpensive space for artists and entrepreneurs to work and share resources, and Alexandra Clark, the owner and CEO of Bon Bon Bon chocolates.

He says the app also features 75 Detroit restaurants, with information about the history of each establishment and recommendations on what to order. Featured restaurants include Selden Standard, Detroit Institute of Bagels, Republic, and Lafayette Coney, among others. About 25 shops are also included in the app, such as Hugh, Shinola, and Signal Return, a letterpress print shop. Another category is Hitsville USA, which offers a virtual look at Detroit’s music history.

Tolbert says the app can constantly update without waiting for a download or upgrade from the app store.

He says he has plans to create similar app guides for Chicago and Northern Michigan.

The app is available to download on iTunes, with an iOS version coming soon.