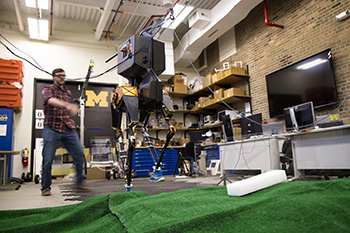 University of Michigan engineers have developed an algorithm allowing a two-legged robot to walk down steep slopes and over unstable and bumpy ground. The robot’s algorithms could help other bipedal robots as well as help powered prosthetic legs gain similar capabilities.

“The robot has no feeling in her tiny feet, but she senses the angles of her joints — for instance, her knee angles, hip angles, and the rotation angle of her torso,” says Jessy Grizzle, a professor of electrical engineering, computer science, and mechanical engineering at U-M. “It’s like walking blindfolded and on stilts.”

Grizzle says the robot, named Marlo, can walk and fall in any direction. He says the main controller handles the forward and backward motion and balance, while a second controller handles side-to-side balance. Marlo has 15 different gaits to handle different walking speeds and ground heights. The robot steps blindly, sensing the changes in ground height and adjust its gait according to terrain and speed.

Grizzle and his research team plan to merge the robot’s two algorithms into one algorithm that can support more agile movements.

Robert Gregg, an assistant professor of mechanical engineering and bioengineering at the University of Texas-Dallas, adapted the algorithm to control a prosthetic lower leg. When an amputee tried out Gregg’s robotic leg on a treadmill, he was able to walk naturally.

“We hope to encode similar abilities into our robotic prosthetic leg so that lower-limb amputees can just as easily walk about the community without having to think about the terrain,” Gregg says.