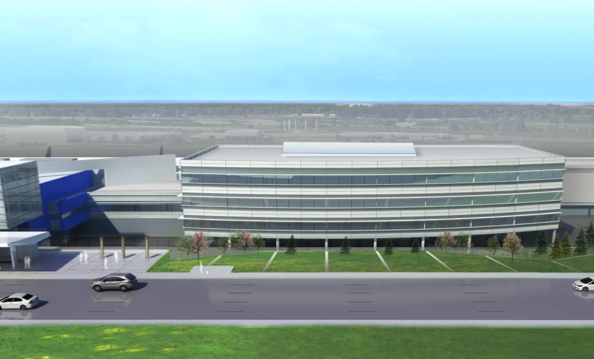 An 84,000 square foot, four-story headquarters facility for Detroit Metro Airport in Romulus will be constructed near the North Terminal and is expected to open in 2017.

“This new facility will be much more efficient, less costly for us to operate and maintain, and the project continues our organization’s efforts to improve and modernize our facilities while operating in an efficient and sustainable manner,” says Brian Lassaline, an airport spokesman.

Currently, the airport’s administration offices are in the former Smith Terminal, built in 1957. Passenger service at the terminal moved to the North Terminal a few years back. At 305,000 square feet, the Smith is much larger than needed for administrative activities, Lassaline says. Over time, the Smith Terminal will be torn down.

“The new headquarters building will have some operational space, but will primarily serve our management and administration teams,” Lassaline says. The building will house about 180 employees.

Ghafari, an architectural, engineering, and consulting firm in Dearborn, is the architect of record for the new administration building. The firm has designed and built dozens of airport facilities, terminals, cargo centers, and aircraft maintenance facilities all over the world.

Lassaline says the planned conceptual design features a glazed curtain wall and metal wall systems that “will complement the modern, architecture of the North Terminal, and its transparent glass box entry.” The design also includes open collaboration areas and a central staircase.

The project cost has not yet been determined. Construction is expected to begin before the end of the year. â€‹