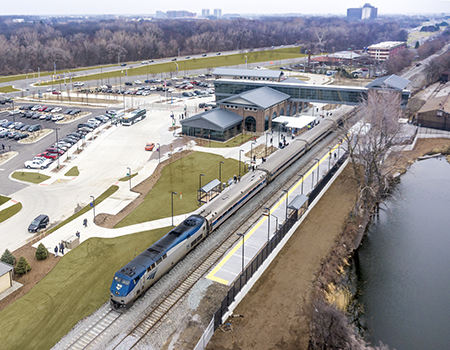 The $28 million John D. Dingell Transit Center has begun operation in Dearborn, replacing a smaller passenger rail station that was built in the 1970s.

“From the very beginning, Dearborn’s goals for the location of the new transit facility were all about connectivity,” says Patrick Doher, principal-in-charge for Ann Arbor-based SmithGroupJJR, which served as the landscape architect and civil engineer for the project. “The location needed to serve as a gateway and provide regional connection to the city’s great assets, the non-motorized greenway system, businesses, and residential neighborhoods.”

The 16,000 square foot, two-story transit center, on Michigan Avenue next to The Henry Ford, connects passengers to Amtrak’s Wolverine service, which goes from Pontiac to Chicago. It also links to SMART, DDOT, and Greyhound buses, corporate and hotel shuttles, and taxis.

The center is named for the John D. Dingell, the longest-serving member of Congress, who retired in 2014 after 58 years.

Southfield-based Neumann/Smith Architecture led the design team, creating a transit center that blends traditional and contemporary elements. “The design of the transit center and towers contrasts Romanesque arches of brick and stone masonry with a sleekly inserted metal-paneled bridge that pierces the station’s volume,” says Mike Kirk, principal for Neumann/Smith.

The station will support the eventual operation of the Detroit to Chicago high-speed rail and the proposed Ann Arbor to Detroit commuter rail line. The rail line could also allow for a bus connection to Detroit Metropolitan Airport. â€‹