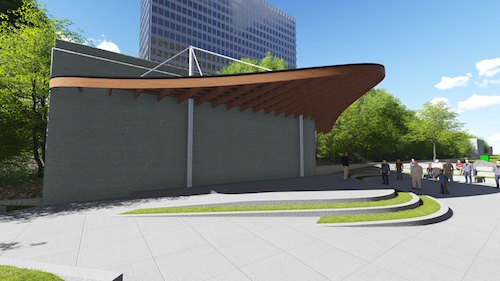 A new small-scale, outdoor performance space along Detroit’s Dequindre Cut Greenway, called The Campbell Memorial Terrace and funded by a $1 million gift from the McGregor Fund to the Detroit Riverfront Conservancy, will be unveiled to the public on Oct. 13.

Named after the late C. David Campbell —the McGregor Fund’s former president and a founding member of the conservancy’s board of directors — the new gathering space, located at the Lafayette Street ramp between Orleans and St. Aubin Streets, features a covered stage and tiered concrete seat walls. Steps and ramps allow for access to the site, while is surrounded by landscaping.

Construction on the terrace project began in spring of this year, and officials from the fund and the conservancy expect that the space will become a popular destination for performances by members of the community or for scheduled programs and special events.

“…I’m sure kids who encounter (The Campbell Memorial Terrace) on their way to the riverfront will enjoy putting on their own impromptu shows,” says Mark Wallace, president and CEO of the Detroit Riverfront Conservancy.

The Detroit Riverfront Conservancy, a nonprofit organization founded in 2003, serves as the steward of the RiverWalk and the Dequindre Cut, a two-mile paved pedestrian greenway that stretches from Atwater Street at the Detroit Riverfront to Mack Avenue in Eastern Market.

Established in 1925, the McGregor Fund has disbursed over $242 million in grants to nonprofits working in human services, health care, education, and arts and culture.