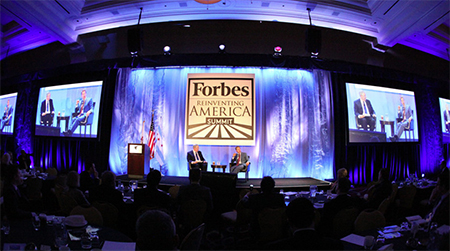 Forbes Media will host an inaugural event in downtown Detroit in May that will bring together leaders in Michigan and the U.S. to talk about ways to attract and retain talent.

“Detroit is the perfect location to talk about the reinvention of the workforce in America, and we are thrilled to be hosting this conference,” says Gov. Rick Snyder. “With millions of dollars in new business investments and growing job opportunities, our turnaround from the recession is a national story and example.”

In addition to Snyder, the two-day invitation only event will include speakers such as General Motors CEO Mary Barra; Dan Gilbert, founder and chairman of Quicken Loans and Rock Ventures; Laszlo Bock, senior vice president of people operations at Google; and Steve Forbes, chairman and editor-in-chief of Forbes Media, among others.

The summit will explore topics such as how cities shape the workforce, how to bring diversity into the workplace, and how a workforce can compete globally, among other topics surrounding talent.

“Historically, Detroit has been recognized as a magnet for strong-willed and highly-skilled pioneers to assemble and create game-changing products,” Gilbert says. “After more than a century of moving the world forward with big ideas, talent is joining the city’s growing entrepreneurial tech start-up scene, as well as the innovative and creative teams of larger more established companies, at a record pace.”

The summit will be held at the Westin Book Cadillac Detroit from May 4-5.

To request an invitation, visit ForbesConferences.com/event/2015-forbes-reinventing-america-the-workforce-summit/. If accepted, there’s a participation fee of $295.