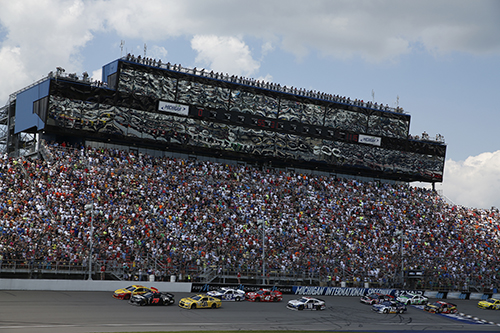 The Michigan International Speedway — the fastest track on the NASCAR circuit — will host races on June 15 and Aug. 17 along with multiple events during the respective race weekends. In addition, the racing association announced modifications to the Chase for the NASCAR Sprint Cup setup by increasing the number of drivers from 12 to 16 on the field, and offering a new advancement format.

The revised format puts a premium on winning races, says Brian France, NASCAR chairman and CEO. “We have looked at a number of concepts for the last three years through fan research, models, and simulations, and also maintained extensive dialogue with our drivers, teams, and partners. The new (format) will be thrilling, easy to understand, and help drive our sport’s competition to a whole new level.”

Under the new playoff format, the number of drivers will decrease after every three races. During the first three races, or the Challenger Round, there will be 16 drivers, followed by 12 in the Contender Round, eight in the Eliminator Round, and four in the final race — the Sprint Cup Championship in November. A win by a championship-eligible driver in any race automatically secures him or her a spot in the next round.

Roger Curtis, president of the Michigan International Speedway in Brooklyn, says the changes give the races a sense of urgency. “Every sport changes, as do their athletes,” Curtis says. “It is no different for NASCAR and I applaud them for taking bold steps to make every single race count (while putting) the emphasis on racing to win.”

The season opens on Feb. 23 with the Daytona 500 in Daytona, Fla. and concludes on Sept. 6 at the Richmond International Raceway in Richmond, Va. The Sprint Cup Series starts on Sept. 14 at the Chicagoland Speedway in Joliet, Ill. and ends on Nov. 16 at the Homestead-Miami Speedway in Homestead, Fla.

The racing schedule at MIS includes:

For more information or to purchase tickets, visit mispeedway.com or call 800-354-1010.