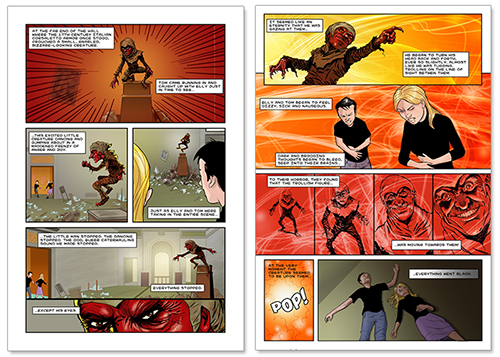 Tarrytown, N.Y. has the Legend of Sleepy Hollow, New York’s Catskill Mountains can claim Rip Van Winkle, and if local author Josef Bastian has his way, Detroit will bring the Nain Rouge — a mythical creature said to haunt Detroit — to the forefront. By the time he’s done writing the last of his young adult trilogy, Bastian is looking to turn the graphic novel into a film.

“This legend is 300 years old,” says Bastian, who recently launched a Kickstarter campaign, which runs through April 14, to support the graphic novel component of his plan. “There had been newspapers articles mentioning it, but there’s was no back story, nothing tying it all together.”

So Bastian, a full-time learning consultant, began fleshing out the story after the corporate education training company he worked for shut down in 2009. “It was a scary time for a lot of people here. That’s when the legend kind of resurfaced. (I wrote a story) tying it into all of the trouble the that the city was having, trying to answer: ‘Why do bad things happen to good people, and what do you do about it?’”

As legend has it, the Nain Rouge, also known as the Red Dwarf, cursed the city of Detroit after fighting French explorer Antoine de la Mothe Cadillac and his officers in the early 1700s. In Bastian’s rendition of the tale — which he turned into a trilogy published by Amazon and available at Barnes & Noble locations and local retailers including the Detroit Shoppe and City Bird — tells the story of two middle school students, who run into the Red Dwarf while on a field trip to the Detroit Institute of Arts.

Since the first two books of the young adult series have been published, with the third on the way, Bastian has decided to take a different approach to telling the same story — in an 80-page, full color graphic novel. “Storytelling has become much more visual,” Bastian says. “As technology evolves, we’re becoming much more visual. When you (use) the clock on your iPhone, you’re touching an image of a clock — not the word ‘clock.’”

The graphic novel will retain the same story and text as the original books, while bringing a new artist’s perspective into the mix. Patrick McEvoy will serve as the novel’s artist, using Martin Klebba, a Troy-native who has been in films including Pirates of the Caribbean and Zombieland, as the basis for the appearance of the Nain Rouge.

From there, Bastian hopes to expand the story into a film, which he expects will begin shooting in Detroit next year. His goal for the Kickstarter campaign is to raise $18,000.

In the meantime, Bastian — who is currently in discussions with potential comic book publishers — will promote his project at the Marche du Nain Rouge event on March 23. The parade begins at 1 p.m. at the Traffic Jam & Sung parking lot in Midtown, with an after-party at the Masonic Temple. Bastian says he will be there selling merchandise, along with Klebba, who will be signing autographs.

“It’s in its fifth or sixth year, and it just gets bigger and bigger every year,” says Bastian, likening it to Mardi Gras.