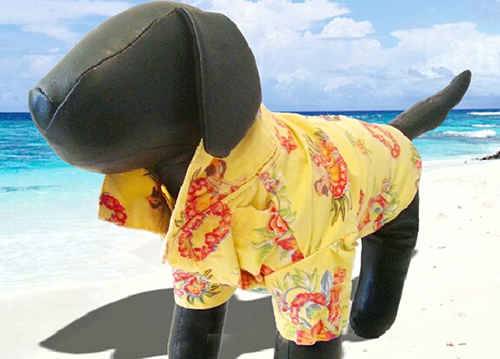 March was a big month for My Fabulous Puppy, a handmade dog-clothing company based in Troy. Not only did the upcycled luxury lifestyle line open the show for the eighth annual Fashion Week Brooklyn in New York earlier this month, the company has expanded its catalog of pet fashions to include teacup-sized clothing and has introduced a line of Hawaiian T-shirts.

“I saw more people asking for (teacup) size,” says Warren Agee, a designer and owner of My Fabulous Puppy, which sells the clothing and accessories in stores across metro Detroit such as Somerset Dog Grooming, which has three locations in Oakland County, as well as in New York and California. In 2013, custom orders for teacup dogs made up about 30-35 percent of his business. “I thought it would be beneficial for small dogs,” he says.

The Hawaiian shirts, which Agee introduced last week, have already been selling well, he says. “Most of my products are repurposed material. It was something new and different, and I found some interesting Hawaiian material from an estate sale; I just ran with it.”

Don’t expect to see too many pups sporting the aloha shirts in Michigan, however. Agee, who receives orders from Australia, the United Kingdom, and Ukraine, says customers in the Midwest are prone to buy sweaters and more conservative clothing. On the East and West Coasts, however, customers “buy more flashy clothing.”

The inspiration for My Fabulous Puppy came after Agee, who grew up in Troy and majored in fashion design at the Illinois Institute of Art in Chicago, adopted a dog from a shelter and began making custom clothing for the dog. He says when he took the dog out for walks with the clothing, he would receive compliments and inquiries about where to get his canine fashions. He decided to start selling his creations.

He started with three handmade designer dog collars and has expanded with more than 300 exclusive designer dog sweaters, shirts, raincoats, neck warmers, and polo shirts, all made from repurposed material.

The company has received considerable traction thanks to word of mouth, advertising via Facebook and Google, and a shop on etsy.com. Likewise, the recent fashion show in Brooklyn, which included actor Richard Pryor Jr. and NYC Life’s Doggie Moms Eli the Chihuahua with Karen Biehl, has also led to an increase in sales for the teacup-size clothing, Agee says.

Agee says he is in the planning stages for putting together a benefit dog fashion show — using dogs from and to support local rescue shelters.

In the meantime, Agee says he plans to continue to build his brand by reaching out to more pet boutiques and dog shows. “Hopefully, (the brand will) soon end up in big-box pet stores like PetSmart.”