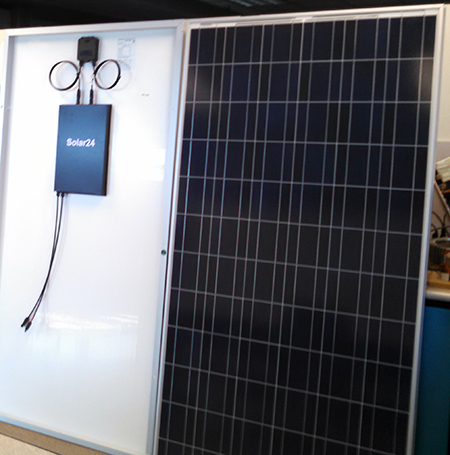 Muskegon-based Energy Partners has developed a new, commercial-scale solar panel that — unlike traditional solar panels — has the ability to discharge energy 24 hours a day.

The release of the new energy panel increases the capacity of the so-called Solar24 device, which collects solar energy during daylight hours, storing it in a built-in, lithium-ion battery pack. Following that, Solar24 can discharge every day or night.

“One of the shortcomings of solar technology is that it’s limited to daylight hours,” Boezaart says. “The development of Solar24 and the ability to store and manage the energy generated open up a wide range of possible applications.”

The opportunities for the new device, which is paired with 300-watt solar panels, include supporting portable solar-powered communication systems in remote or isolated locations, such as in emergency or disaster relief situations.

Jim Wolter, Energy Partners’ president and CEO, says he’s already had interest from national companies, including Michigan-based firms, which are seeking to mass-produce the device. The product was developed using technologies and materials from state-based suppliers, he adds.