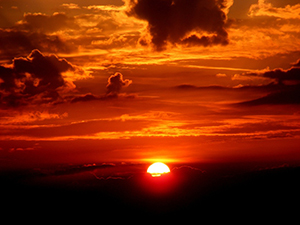 Sol Electrica, a Muskegon-based company and an affiliate of Grand Valley State University’s MAREC business innovation center, has been issued U.S. patents for its modular solar power plant that company officials say produces electricity at about half the cost of traditional solar panels.

“There are five separate systems inside the modular solar power plant,” says Michael Lee, chief technical officer at Sol Electrica. “It’s a new way to capture the sun — it’s actually concentrating the sun’s heat, collecting it, concentrating it, and then putting it into what’s called a vacuum chamber.”

Lee says the vacuum chamber does not allow any of the heat to radiate out, unlike traditional solar panels, in which about 25 percent of the heat is radiated out and not used. He says in Sol Electrica’s system, the heat is transferred by a method that uses compressed helium, which is about 1,000 times more thermally conductive than water. The heat then goes into a specialized boiler followed by a turbine generator.

Lee says customary solar farms use large amounts of natural gas to keep the system hot at night, unlike Sol Electrica’s system, which does not have to be kept hot.

Sol Electrica, has been working from Grand Valley’s MAREC facility for about two years, where it is now finalizing the turbine generator component, called EnviroGEN, a natural gas to electric generator that generates 800 kilowatts of energy.

Over the next two years, Sol Electrica will focus on producing the solar systems, and then the company will start making small solar farms, which it hopes to place in cities throughout the state, he adds.

“It’s our goal to make Michigan one of the lower cost energy states and also grow economic development and try to bring businesses into Michigan realizing that they can get very low energy costs,” Lee says.