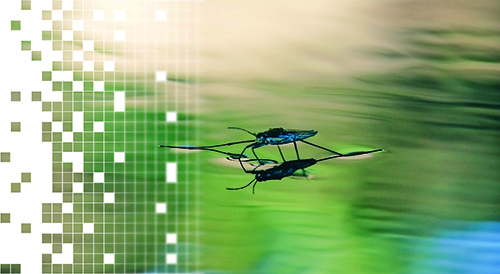 Researchers at the Michigan State University College of Engineering are using water striders, also known as water bugs, as the model for a robotic sensor that could eventually collect environmental pollution data from fresh water sources.

The water bug sensor, which can float on water, collects samples of chemical or bacterial readings, will have the ability to jump, enabling readings in the air as well.

“The idea is to create very inexpensive, mobile sensors or small robots that can be quickly deployed, energy efficient, and serve a large number of environmental monitoring applications,” says Matt Mutka, chairperson of MSU’s department of computer science and engineering. “We need to detect the concentrations and directional flow of the contaminants so we can create a map of how it is distributed in the water.”

Mutka says the technology will come in handy when there are events such as the 2010 oil spill in the Kalamazoo River. The deployment of a large number of sensors would have been better able to detect where the pollution, in this case oil, was headed.

“These sensors will be small and easy to place in the water by being tossed from shore or a boat,” Mutka says. “Once in the water, they will communicate with each other, consolidate their data samples and forward the samples to a receiver at the water’s edge, which can forward to servers that further process the data.”

IN OTHER MSU NEWS, the university is one step closer to establishing its planned biomedical research center in Grand Rapids. On Tuesday, the school released a request for proposal to three firms identified through a previous selection process.

“We are looking forward to engaging these firms in discussions about a public-private partnership that would bring value to the site and further enhance MSU’s vision for research and the commercialization of science,” says Vennie Gore, MSU vice president for auxiliary enterprises.

Pending appropriate approvals in the process, substantial completion of the facility, to be based at the former Grand Rapids Press building property, is expected in late 2017.