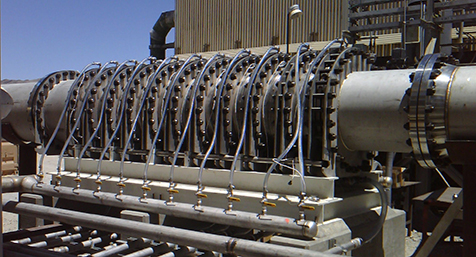 Black Pine Engineering, a student-led startup at Michigan State University, recently won a $100,000 grant through the 2014 Clean Energy Challenge for their efforts to commercialize a cost-effective technology that removes harmful gases from geothermal power plants.

“Typically, turbo machines are made out of metal, which is extremely expensive to manufacture,” says Zack Hoyle, co-founder and lead design engineer for the startup. “The technology we’re tying to commercialize, called the woven wheel, makes turbo machinery wheels out of carbon fiber. It has the potential to make these machines for 10 times cheaper than anything that’s out there right now.”

When applied at a geothermal power plant, the technology, which was invented by Norbert Mueller, an associate professor at MSU, can increase the plant’s power generation by eight percent. “That’s pretty significant for a geothermal power plant. We’re making a clean energy power generation source even more efficient and more effective,” Hoyle says.

The entrepreneur says Black Pine’s 12-person team will use the grant, awarded by the U.S. Department of Energy, primarily for prototyping and to help pay for the license to use the patented technology. He adds that the competition — which required his startup to present its business plans to a panel of investors, policymakers, and entrepreneurs earlier this month in Chicago — was a good learning experience. “As an engineer, you don’t really learn about this business stuff, and now I’m working on writing business plans and pitching to investors. It’s been an interesting and wild ride,” Hoyle says.

“The challenge finds the very best in clean energy technology businesses and helps bring them to the marketplace,” says Amy Francetic, CEO of the Clean Energy Trust, which coordinated the competition. “These prizes will help these entrepreneurs to move their technologies out of the laboratory and into the marketplace, helping the nation to continue to grow its burgeoning clean energy economy.”

Black Pine Engineering is looking at a number of different investment options, including a potential partnership with a geothermal power plant looking to buy three systems. Hoyle notes the company would need to secure about $3 million to get its manufacturing operations up and running in Lansing before it can begin manufacturing.

Given turbo machinery is anything that involves spinning blades and fluid — wind and water turbines, air compressors, and fans, for example — the geothermal application of the technology is just the first step for Black Pine Engineering, Hoyle says. “We believe that this technology can be used in many different areas,” he says.

In June, Black Pine Engineering will go on to compete for an additional $100,000 at the 2014 National Clean Energy Business Plan Competition in Washington, D.C.