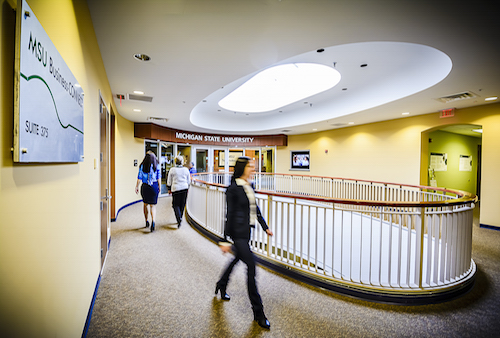 Michigan State University’s Translational Research and Commercialization program, which works to accelerate commercial development of biology-based projects, has been designated as the first innovation hub in the state.

Housed in the university’s Innovation Center, the program has received a two-year, $1 million grant from the Michigan Strategic Fund, matched by $1.3 million from MSU, which will allow it to provide research and expertise on technology trends.

“As an innovation hub, we will now be able to support innovators across the state to advance the (agriculture-biology) field,” says Richard Chylla, executive director at MSU Technologies. “The success of the (Translational Research and Commercialization) program and interest from those outside the university is what helped us achieve this milestone.”

Through the funding, the hub will also work to support projects with a focus on agricultural research and bio economy technology that have commercialization potential. An oversight committee for funding consideration and project mentoring will review selected projects.

Chylla says the funding gives MSU the largest share of the agriculture and biology research in Michigan.

Prior to receiving the hub designation, the university’s Translational Research and Commercialization Program received 62 project proposals and funded 24 of them. The funding has resulted in the creation of two startup projects, six jobs, and three licenses to industry after two years.