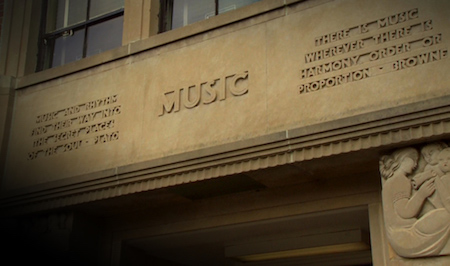 The Michigan State University Board of Trustees in East Lansing has approved a plan to expand and renovate facilities for the College of Music following more than $7 million in initial gift commitments from several donors. The project will include constructing a new building with additional performance, rehearsal, and practice spaces to support the growing program.

“This will facilitate the work of faculty and students in extraordinary ways,” says James Forger, dean of the College of Music. “The renovation and expansion will add much-needed specialized rehearsal spaces, practice rooms, a large lecture hall, faculty studios and offices, a recording and multimedia room, and a public gathering space with a café.”

MSU alumnus James Billman, Jr. set the project in motion with a lead gift designation for an expansion to the original 1939 Music Building and to refurbish key areas. Other major support was provided by alumni Byron and Dolores Cook, and the late Ruth Charles.

“A new building will provide additional performance, rehearsal, and practice spaces that honor audiences and musicians alike with state-of-the-art facilities,” says Billman, who graduated from MSU’s College of Natural Science in 1969. “Spartan musicians regularly thrill audiences with their professional performances, and their performance venues, classrooms, and practice areas should reflect that.”

The College of Music currently supports 550 students working towards music degrees, and an additional 2,000 non-major students who participate in ensembles and classes. The project follows a series of university actions to improve facilities for music students, including an auditorium renovation in 2012.

The college will proceed with additional fundraising for the project, including opportunities for donors to name spaces. The gifts support Empower Extraordinary, the $1.5 billion campaign for MSU, publicly launched in 2014.