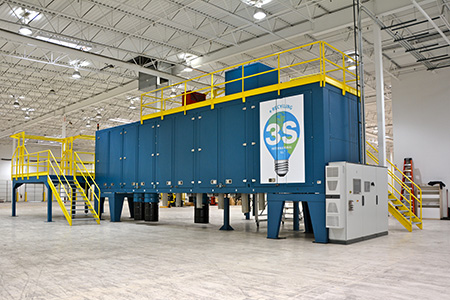 With a growing number of discarded electronics, Mount Pleasant-based 3S International plans to open six to 10 electronics-recycling facilities in the U.S. by the end of 2017, with one metro Detroit location early next year.

“Michigan is probably the most important state to (need this service),” says Joe Yob, co-owner of 3S International, which opened its first recycling plant earlier this year in Tinley Park, Ill. “It’s surrounded by the Great Lakes and has over 20 percent of the world’s fresh water supply.”

Yob says the dangers of contamination are everywhere. He says one gram of mercury can destroy a 20-acre lake and mercury contamination — especially from discarded LCD screens and other backlit electronics — poses a major challenge for Michiganders to recycle.

“Michigan has enough technology to solve the problem,” says Yob, noting that he anticipates the new facility will employ about 50 people. “Now we just need people to fulfill their shared responsibility (by properly disposing their electronics).”

Once 3S International opens its Michigan location (they’re still in talks about where the facility will be), residents will have access to two of the company’s “Bluebox” units, which reduce end-of-life electronics into recyclable fragments and extract the rare earth elements at a rate of 2,200 pounds per hour and 15 million pounds of electronics annually.

Yob estimates that the company will recycle millions of pounds of electronics in the next few months at its Illinois facility and says the need for such services will only grow in the coming years. He references Moore’s Law, noting computing power is projected to double every two years at about half the price.

“When I first bought my laptop in the ’80s, it was about $3,000,” Yob says. “Yesterday, I read an article about a $200 (electronic notebook). They’re not being made to be repaired. They’re made so you can throw them away and buy a newer one.”

Yob says the company will focus on the east and west coasts as well as the south for future recycling locations. He expects the facilities will all be the same size or larger than the 56,000-square-foot site in Tinley Park.

3S International currently accepts electronics from Illinois, Indiana, and Michigan, and collects electronics dropped off at participating Land of Lincoln Goodwill Industries retail and donation centers in Illinois and the Arnold Center in Midland.