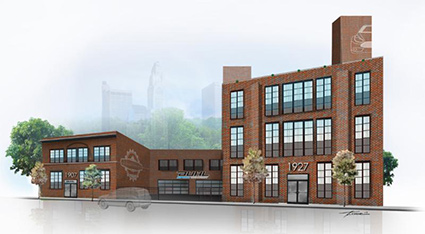 The duo, which launched Buhl Sport Detroit a month ago, purchased a 44,000-square-foot facility that spans 1907 and 1927 Michigan Ave. The adjoining structures, called The Factory at Corktown, are located just south of the former Tiger Stadium site.

“The building is a great multi-use space for what we want to do with our new venture,” says Robbie Buhl, a Detroit native and former Indy Racing League driver. “There will be large functional spaces that can be used for parties, vehicle reveals, or a great party around the auto show. We are in the heart of the Corktown entertainment district where you can see the old Tiger Stadium field, Slow’s Bar BQ, the Mercury Bar, and the old train station is visible out our windows.”

Buhl, co-owner of the Dreyer & Reinbold Racing team, says he and his brother, a financial management executive in Grosse Pointe Farms, are going to invest in the building’s infrastructure while maintaining its historic patina. “There is enough room to house our Red Bull Global Rallycross team as well as companies with like-brands that can benefit from a Detroit address,” Robbie says.

Both buildings were constructed in 1907, and were designed by architect Richard Raseman (who had a hand in designing the Grand Army of the Republic Building in downtown Detroit). Originally, the east side of the building was the headquarters of Chicago Hosiery, which moved to Detroit from its namesake city in 1898. Three months after construction, work began on its companion, Detroit-Alaska Knitting Mills.

The Factory at Corktown spans as high as three stories, and offers onsite parking.

The family traces its history in Detroit to around 1850, and over the years owned or had an interest in Buhl Aircraft, Buhl Stamping, real estate (including the Buhl Building in downtown Detroit), and Parke-Davis Co. (since acquired by Pfizer).

The restaurant, located at 2547 Bagley Ave., features a variety of fish options, such as walleye, whitefish, and river trout that customers can have prepared as fish and chips, a fried fish sandwich, or fish tacos. Huron Room also offers dishes such as a U.P pierogi filled with beef pasty filling, a patty melt, and pheasant.