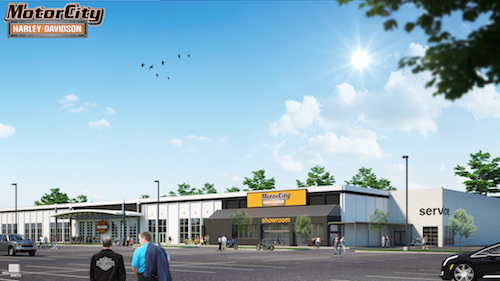 The new complex, which will replace the company’s previous 34,000-square-foot facility, is located on 12 acres of land at 24800 Haggerty Rd. The project was designed by Neumann/Smith Architecture in Southfield.

“We have outgrown the facility that we are currently in,” says Craig Collins, a partner and general manager of Motor City Harley-Davidson. “It’s not efficient, (and) it was a logistical nightmare because we had two separate warehouses along with our store.”

The new facility will also feature an indoor and outdoor space that will serve as a gathering place for large groups of motorcycle riders.

“We want to crush the stereotype of the old biker deal, and outreach to people who would not normally come to our dealership,” Collins says. “We have a motley crew of customers, from lawyers to doctors, and they all like to ride Harleys.”