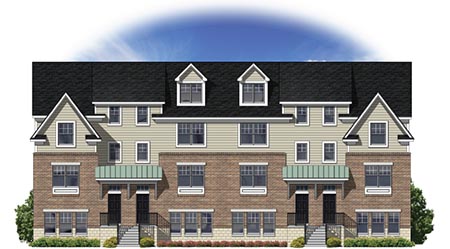 A new townhouse complex is being built in Detroit’s Midtown district expanding on the existing units on Palmer Street, between John R and Brush Street, with an expected availability in mid-August.

David Steuer, of Farmington-Hills based Steuer & Associates Inc., is a co-developer for the $2.3 million project and says because there were already existing units in the complex, he asked for feedback from residents before starting the final three units.

“We went and knocked on the doors of the existing buildings and found doctors and medical school students from Wayne State and they talked to us about how they were using the place,” Steuer says. “That’s what encouraged us to tweak the plans a little bit and make sure that every bedroom had a bathroom.”

“It has the conveniences of being in town with the practicality of on-site spaces for vehicles,” Steuer says.

Additionally, he says the units will have a contemporary look with granite countertops, nine-feet ceilings in the great room, white kitchen cabinets, and stainless steel appliances.

The three-bedroom units rent at $1,995 per month. Multi-year leases are also offered.