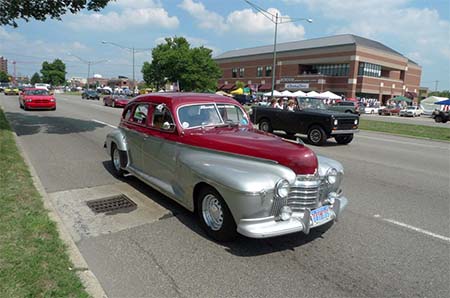 The 21st annual Woodward Dream Cruise presented by Chevrolet, a one-day classic car event down a 16-mile stretch of Woodward Ave., is expected to draw more than 40,000 cars and 1 million people on Aug. 15.

“This is really Americana at its finest,” says Tony Michaels, executive director of the Woodward Dream Cruise. “You show up, you grab a great spot along Woodward in one of the nine communities, and you just take it all in.”

Michaels says the Woodward Dream Cruise will be broadcast on WXYZ Channel 7, and will be syndicated across 80 percent of the country. He says there will also be the Cruise in Shoes 5K run down Woodward on the morning of the cruise. Registration for the run is still open.

“It’s a feel good day, you can feel the pride and the passion of those car owners and they take care of those vehicles so well,” Michaels says. “It’s pure entertainment and everybody is having a good time.”

Dodge, for example, will hold events throughout the week of the Woodward Dream Cruise, including a Dodge display with more than 100 Dodge Chargers, Challengers, and LX body owners on the corner of 13 Mile Road and Woodward on Aug. 14. On Aug. 15, Dodge will offer rides in a Dodge Challenger, a Charger Hellcat, or a Dodge Viper with a professional driver on a closed course.

Dodge is also hosting Roadkill Nights, a pop-up car festival featuring flashlight drag races where drivers can race each other in their own cars on a custom-built track at the Pontiac Silverdome on Aug. 12.

The Woodward Dream Cruise, which started as a fundraiser for a soccer field in Ferndale in 1995, is now considered to be one of the world’s largest one-day automotive events.