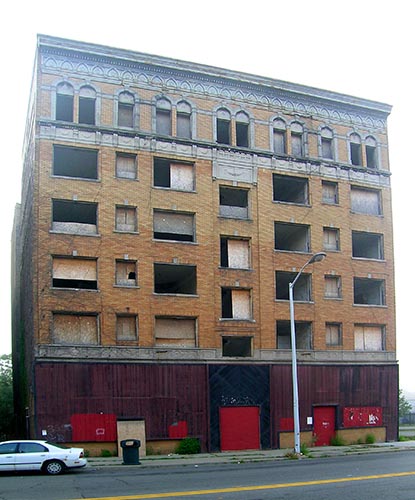 The Cass Corridor Neighborhood Development Corp. are ready to begin renovations on a project that’s seven years in the making: the Cass Plaza.

“(These two buildings) are the gateway into the Cass Corridor,” says Patrick Dorn, executive director of the CCNDC. “This project will remove the last big eyesores from this part of town. It will be more welcoming (as people come) into the city.”

The plaza’s buildings, 3550 Cass and 149 Davenport, will be gutted starting Jan. 2 and restored to their original early 20th-century appearance. Together, the buildings will include 47 units of affordable housing, which is in high demand, Dorn says.

Dorn’s organization oversees about 27 buildings and manages 317 existing units with 97 percent occupancy. “We just renovated 24 units in another building, the Coronado (on Second Avenue). There were so many applicants, I could have filled it twice over,” he says.

Rent at the Cass Plaza, expected to be completed by early 2015, will likely be on par with the organization’s other properties, around $600 a month. A coffee shop will be open to the public in the plaza’s lobby.

“Our organization has only two goals,” Dorn says. “That’s to provide safe and affordable housing and to enhance the life of the residents in the corridor.”