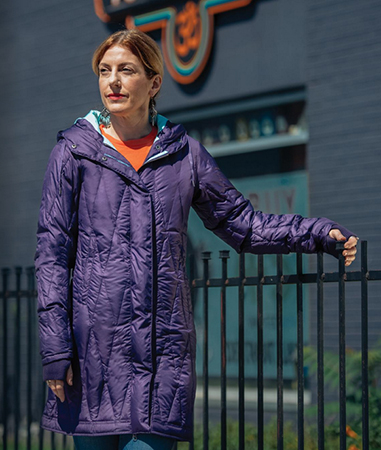 Various Detroit-based organizations will benefit from a new line of outerwear from Moosejaw, a Madison Heights-based national retailer that specializes in outdoor recreation apparel.

Each piece in The Detroit Collection is named after a local street and modeled by a person making an impact within the city. Part of the proceeds from each jacket will go to that model’s favorite Detroit nonprofit.

For example, a down jacket called The Woodward will benefit Yoga by Design — which provides free yoga classes to people with Alzheimer’s, Autism, and other disabilities — on behalf of model Monica Breen, who owns the Detroit-based Be Nice Yoga.

“We’re proud of our city and we’re proud of our new outerwear, so it seemed natural to bring the two together,” says Eoin Comerford, Moosejaw’s CEO. “Once we had named The Detroit Collection, we realized that it was the perfect forum to recognize the incredible people who make our city what it is today.”

Other models featured in the collection include community leaders such as Carlo “Coach Khali” Sweeney of Detroit Youth Boxing Gym and artists including Everett Weathersby (aka Flaco Shalom). Comerford says these are not the billionaires and philanthropists that grab headlines, but instead people who work every day to make an impact on their community.

Other nonprofits to benefit from the sales include DBG Youth Program, Girls on the Run, and The Empowerment Plan.

“With this year’s line, we’ve developed outerwear that’s truly worthy of carrying Detroit names,” says Steve Fife, Moosejaw’s chief merchant. “Each piece was … designed for the comfort and performance of people that live in the city and play in the outdoors.”