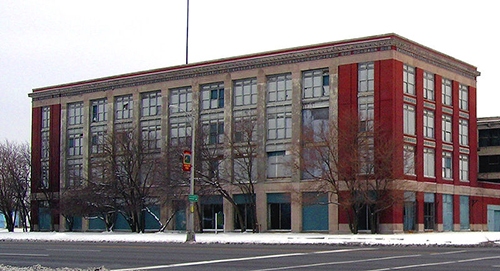 The Highland Park City Council could determine whether the former Ford Highland Park Plant property — at Woodward Avenue and Manchester Street — will be named a Local Historic District as early as August.

Following a $175,000 study, funded by the Michigan Historic Preservation Office, the Historic District Study Committee conducted a public hearing on June 30 and is reviewing the input received before making its recommendations to the council.

“Many people wanted to know, ‘What does it mean?’ ” says Deborah Schutt, executive director of the Woodward Avenue Action Association, which recently acquired two of the buildings on the property, including the former administrative headquarters of Ford Motor Co. Schutt is also a member of the eight-person study committee.

“Actually, the (Local Historic District is the) only designation that has teeth in it to preserve the property,” Schutt says. “It’s already a National Historic Landmark and it’s on the State Register, but those designations don’t have any preservation tools — so if someone wanted to bulldoze the buildings the next day, they could do it.”

Schutt says such a local designation is critical for the proper preservation of the site that once produced millions of Model T’s, and was where Henry Ford launched the $5 workday in 1914.

“Something like a Local Historic District provides (Highland Park) with another tool toward economic development and preserving what’s important in terms of sustainability for our community,” Schutt says. “Communities will not be sustainable if they can’t establish a sense of place where people want to be. And a part of that is a historical component, because there is a personality and a history that can’t be duplicated in a strip mall.”