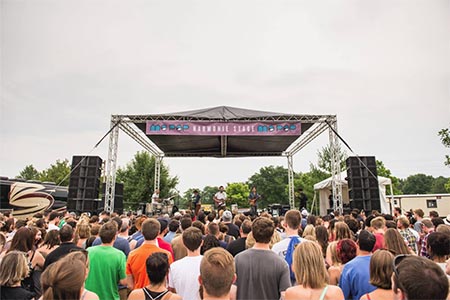 The Mo Pop Music Festival, with headliners such as Passion Pit and Modest Mouse, is coming in July to the West Riverfront Park in downtown Detroit.

“We’re excited to plant our festival flag in between views of the Detroit skyline and the Ambassador Bridge,” says Dan McGowan, managing partner of The Crofoot music venue in Pontiac who, in a partnership with AEG Live, is producing Mo Pop. “The energy in Detroit is tremendous. It’s another way for us to get involved in the city.”

Mo Pop is now in its third year and was previously held at Freedom Hill Amphitheatre in Sterling Heights. McGowan says he anticipates the largest festival yet with over 10,000 attendees expected over two days — a mix of local and out-of-state music fans.

The festival will be held July 25-26 at West Riverfront Park, a 20-acre expansion of the Detroit Riverfront that opened last year.

The indie-centric festival will feature two stages and a blend of local and national headliners including Iron & Wine with Ben Bridwell (Band of Horses), Brandon Flowers (the Killers), Chromeo, Jessica Hernandez & the Deltas, along with 23 additional acts.

Finding the perfect location was critical, McGowan says. The deal wouldn’t have been possible without support from the Detroit RiverFront Conservancy.

“From our perspective, it was a great opportunity to expose people to that side of the riverfront,” says Mark Wallace, president and CEO of the Detroit RiverFront Conservancy. After being closed off to the public for more than 40 years, the conservancy now sees West Riverfront Park as an “important connection to our neighbors in Corktown and southwest Detroit.”

In addition to live musical performances, Mo Pop will feature a technology tent highlighting city-centric hackspaces and start-ups, a craft biergarten, local arts and crafts vendors, and more than a dozen food trucks. Large-scale art installations will be on display as well as neighborhood guides highlighting nearby restaurants and businesses.

IN RELATED NEWS, Chene Park, an amphitheater on the Detroit River, has opened up ticket sales for the Wednesday Jazzy Nights concert season, in celebration of the amphitheater’s 30th anniversary.

“No where in Michigan, or for that matter across the country, can you come to an outdoor concert venue with a backdrop of one of the most important waterways in the world,” says Shahida Mausi, president and CEO of The Productions, promoter for Chene Park.

Other summer concerts include George Clinton, Anthony Hamilton and Fantasia, and the Gypsy Kings.

The jazz concerts will be held at 7:30 p.m. every Wednesday night starting June 3. To purchase tickets, visit CheneParkDetroit.com.