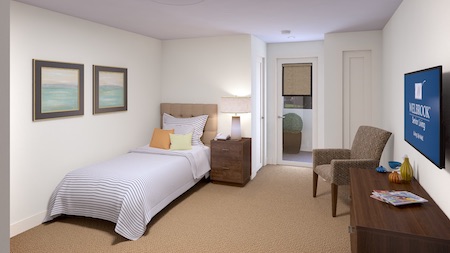 “I think what you’re seeing in Detroit, with people moving back to the city, you see businesses moving back, obviously you see restaurants and entertainment, but what goes along with that is needing basic services to be there, so this is a healthcare service provider, and Detroit will need more places like this as Detroit goes through its revitalization,” says Roger Mali, managing director of Mission Point Management. “When you look at the when most of these nursing homes were built in Detroit in the 1950s, 60s, and 70s, there was a completely different model of healthcare and a completely different attitude to the way that we take care of people who need healthcare. So this place fulfills a need because it brings modern amenities that are being offered in other areas to Detroit.”

Mali adds that the company plans to work with the major hospitals and health systems from Detroit and the surrounding areas.

“That will certainly be where we get a lot of our residents from,” he adds. “This facility is going to focus on rehabilitation and we’re going to have a lot of short-term stays, so it’s going to be a hotel-like setting with private dining, concierge services, and access to all the facilities downtown, still in a skilled nursing environment, so I think a lot of local hospitals will be excited to discharge their residents to us, because there’s going to be nothing like this in the City of Detroit.

The building was originally constructed by the Archdiocese of Detroit and was operated the Daughters of Divine Charity until 2013. Mali says between the acquisition and renovation, investment costs for the project are totaling $13 million.

“We’re going to be doing a top-to-bottom renovation of the facility, essentially the building itself is beautiful, and the foundation and structure are all sound, but the reason we’re putting so much into it is we want to convert it to a fully modern skilled nursing facility, so that’s what’s going to take so much cost and time to do,” he says.

The building is expected to be completed in spring 2018.