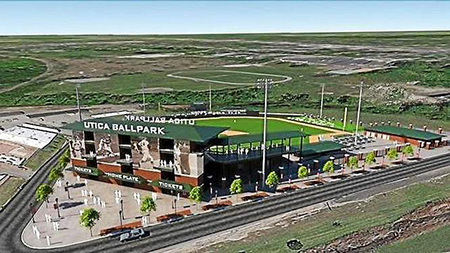 Construction of a new $8 million to $10 million minor league stadium is set to break ground in May, bringing baseball to downtown Utica.

Once completed, the stadium will hold 4,500 fans — 2,500 fans in the bowl area and the rest in a combination of indoor and outdoor suites, decks, patios, and clubs.

“This ballpark is a welcomed development in Macomb County,” says Mark Hackel, Macomb County executive. “This minor league stadium is a great economic advantage for the city of Utica.”

The ballpark is being developed by Rochester-based General Sports and Entertainment on land donated by the Utica Downtown Development Authority, who values the land at $600,000. In addition, a 500-spot parking lot will be built to accommodate fans. Plans for a mixed used retail-condominium have also been discussed.

An opening day has yet to be decided for the stadium.

“We have to see once we break ground,” says Josh Hartman, director of sales and marketing at General Sports and Entertainment. “Then the general contractor can give (us) a better timeline.”

The ballpark, at Moscone Drive and Auburn Road, will be used by teams in a newly-created league formed by General Sports and Entertainment. The teams will have no affiliation to any major league teams.

During the off season, the stadium will be used for community events such as concerts, fireworks, soccer games, high school sports, graduation ceremonies, and possibly an ice skating rink for winter.