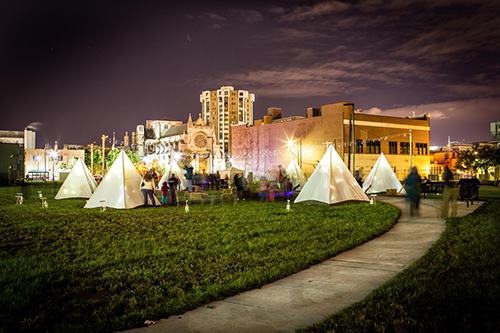 Calling all artists, lighting designers, and architects: Dlectricity is officially accepting entries for its two-day light art festival, to be held Sept. 26-27. Back for its second tour, the biannual event is expected to attract tens of thousands of people to the Woodward Corridor and the cultural center.

“We had over 75,000 people come out (to the 2012 festival),” says Annmarie Boruki, special projects manager at Midtown Detroit Inc., which produces the festival. “There were a lot of people out walking. The streets were crazy.”

Dlectricity, inspired by nighttime art festivals from around the world, will feature up to 35 projects, mostly along Woodward Avenue.

Boruki says the event’s curatorial committee will select 25 projects in addition to inviting up to 10 different national and international artists to do some larger, signature pieces. The temporary exhibitions can include everything from light art and 3-D mapping installations to performances and works that utilize mobile platforms.

New this year: The festival has joined forces with the Detroit Design Festival. “We’re aligning our dates so that both events are happening the same week. We’re going to retain the brand and marketing for each event, but we’re also trying to create a larger, international destination for the arts here,” she says.

The benefits of the design are twofold, Boruki says. Not only did the first event encourage pride in the Detroit community, the economic impact is also significant. “For many of the restaurants, Dlectricity was one of their top grossing nights of (2012). MOCAD had 10,000 people go through the museum over those two nights — that’s a lot of people,” Boruki says.

To submit an entry for the event’s open call, which ends March 31, visit dlectricity.com.