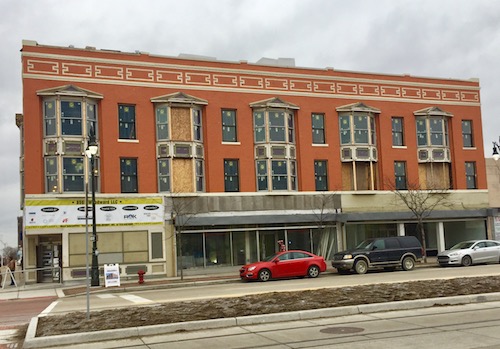 Midtown Detroit Inc., a nonprofit planning and development agency, today announced a $44 million investment in a series of buildings along Woodward Avenue, just south of West Grand Blvd. The projects in the emerging Woodward Grand District will include offices, artist lofts, retailers, and at least one restaurant.

The three-story Woodward Grand Building, located at the southeast corner of Woodward and West Grand Blvd. and built in 1896, will include 10 loft apartments, the headquarters of the Ralph C. Wilson Jr. Foundation, and a new restaurant, to be called Wilda’s Café (from one of the founders of Rose’s Fine Foods, a diner along East Jefferson Avenue).

David Egner, president and CEO of the Ralph C. Wilson Jr. Foundation, says the organization is investing $500,000 into the Woodward Grand Building to add green infrastructure improvements, including a rooftop garden (to be used by Wilda’s Café), cisterns to collect rainwater that will be used throughout the building, and highly efficient mechanical systems.

Green infrastructure is a focus of the foundation’s “Healthy Communities” funding area, and the project will serve as a case study and education tool for those doing similar development projects in the city and region, Egner says. The architect is McIntosh Poris Associates, which has offices in Detroit and Birmingham.

“We are very appreciative of our lead funders including Michigan Economic Development Corp., Capital Impact Partners, Invest Detroit, PNC Bank, our partners including the Ralph C. Wilson Jr. Foundation, and to so many others who have helped bring this vision to fruition,” says Sue Mosey, executive director of Midtown Detroit. “We are all working collectively to open new housing and commercial space to help create a vibrant neighborhood in New Center along the new Qline.”

The Qline, a light rail transit system that will run from West Grand Blvd. to Congress Street in downtown Detroit, is scheduled to begin service in late April or early May.

The Woodward Grand District includes Detroit Hardware Co., Prince Menswear, a soon-to-be Atomic Chicken, a nail salon, Motown Coney Island, a pharmacy, and a nail salon, among others. The renovation of vacant structures in the district will be completed over the next two years.