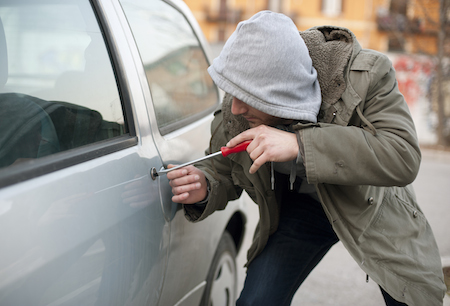 In 2013, 24,567 vehicles were reported stolen in Michigan, down 69 percent since the state’s peak auto theft year in 1984, when a record 78,578 vehicles were stolen, says a new report from the National Insurance Crime Bureau.

“In the old days — and we still see it in some popular movies — someone could reach under a dashboard and play around with some wires, and take off,” says Frank Scafidi, public affairs director for the Des Plaines, Ill.-based nonprofit, which aims to prevent, detect, and defeat insurance fraud and vehicle theft. “For the most part, that’s hasn’t been possible since the late 1990s, when they started to come out with the smart keys and other technology.”

Scafidi also credits the decrease to innovative law enforcement programs, including the use of bait cars and license plate readers. “The prolific (thieves) could steal four or five cars in a single night because they were that good or because the targets were that easy. But it was hard to get evidence before bait cars were on the horizon.”

Today, some authorities strategically place running cars with the doors unlocked, filming and recording a thief in the process. “Now they’re getting convicted for the crimes that were difficult to prove before,” Scafidi says.

That said, while thefts are on the decrease, it doesn’t mean they don’t happen, Scafidi says. Today’s car thieves acquire keys illegally, through car valets or by posing as legitimate vehicle owners seeking a replacement from a dealership or locksmith. They also use VIN switching or counterfeiting, and secure loans for high-end cars using stolen or fraudulent identities.

“Keep your car locked,” Scafidi advises. “Don’t make it too easy for them.”