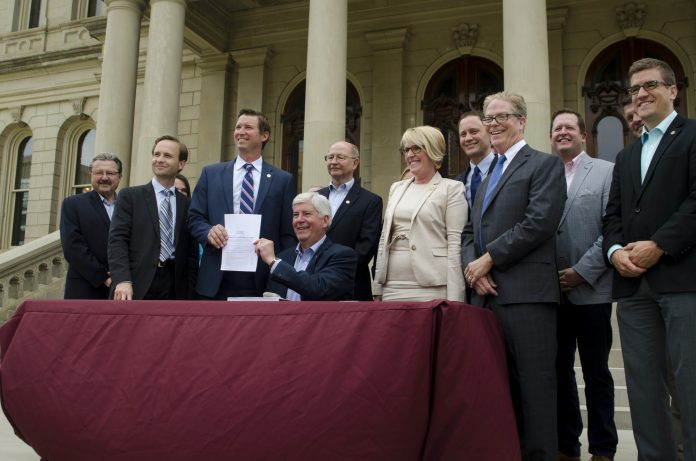 Michigan Governor Rick Snyder Thursday signed the state’s fiscal year 2019 budget into law. Senate Bill 848 was sponsored by Sen. Dave Hildenbrand and provides $39.9 billion in state funding. The bill is now Public Act 207 of 2018. Snyder did not veto any portion of the budget.

“I am proud of the budget I signed today, as well as the previous seven budgets. We have created a new culture and expectation here in Lansing of getting budgets done responsibly, thoughtfully, and early,” says Snyder. “This is further proof of what can happen when people commit to working together in a positive fashion without the fighting and negative discourse that has become too commonplace.

“This budget will maximize Michigan’s momentum with significant investments in our key priorities. We also have continued a strong commitment to fiscal responsibility by paying down debt and increasing our rainy-day fund balance to more than $1 billion.”

The signing marks the eighth year in a row the budget was completed in advance of the required deadline, avoiding stalemates and shutdowns.

In the 2019 budget, $1 billion is budgeted for maintaining and improving Michigan’s transportation infrastructure. Of this, $150 million went to support the required deposit to the $1.2 billion road funding package signed into effect in 2015. This year’s budget also includes a $300 million one-time revenue dedicated to fixing roads as a result of the surplus identified after the Consensus Revenue Estimating Conference in May. About $600 million was generated by the 2015 package.

Up to an additional 75 Michigan State Police troopers will be funded with $4.1 million in on-going funding as well as a $4.8 million one-time payment. This will complement an attrition school of 80 troopers for a total of up to 155 newly trained troopers. The Department of Corrections will train more than 350 corrections officers to fill department vacancies with the support of $9.2 million.

The Department of Natural resources will fund seven new conservation officers with a $1 million investment. About $1 million will also go to the Campus Sexual Assault Grant Program to help reduce sexual assault on college campuses.

About $115 million is provided for the rainy-day fund.

One-time investments include $100 million to the Marshall Plan for Talent, $58 million across fiscal years 2018 and 2019 in new funding for school safety initiatives, and $1 million to support the Rising Tide Program that helps smaller rural communities in Michigan that were not included in the economic comeback.

“Our budget success over the past eight years has been impressive and lays the foundation to build on our comeback now and into the future,” says Lt. Gov. Brian Calley.

Michigan’s unemployment rate remains below 5 percent, and more than 540,000 new private-sector jobs have been added since December 2010.

Highlights of budget accomplishments during the Snyder/Calley administration include covering the health care needs of more than 670,000 Michigan residents through Healthy Michigan and investing in 13 trooper recruit schools to hire 994 troopers, bringing the state’s police enlisted strength to its highest level in 18 years.

Corrections spending has also been kept in check while improving prisoner training and reducing recidivism rates. Road funding has increased by more than $1 billion since 2015, up 42 percent. Long-term disabilities have been reduced by more than $20 billion, and the state is on track to be free of retirement debt by 2038. The rainy-day fund has grown to more than $1 billion, up from $2 million. The state also invested more than $300 million in technology upgrades for the government.