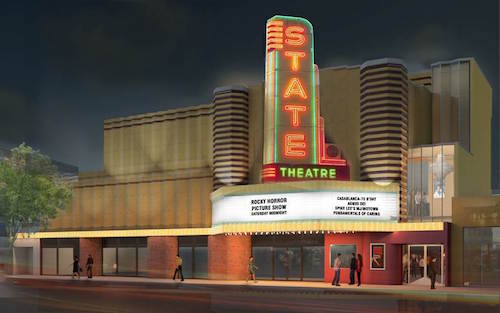 The Michigan Theater Foundation has launched The State and Michigan Project, a capital campaign to renovate the State Theatre in Ann Arbor and make critical capital improvements to the Michigan Theater. The campaign goal is $8.5 million, and pledges of over $6.2 million have already been received.

The State Theatre, located at 233 S. State St., was purchased in 2014 by the foundation, which saved it from being turned into office space. Funds raised through the campaign will restore the theater’s historic marquee and lobby back to its original 1942 Art Deco aesthetic.

“This is a testament to the generosity of our community to support the things that contribute to our quality of life,” says Martha Darling, co-chair of the campaign. “It also demonstrates a clear, community consensus that the iconic State Theatre is a vital part of the downtown landscape that must be preserved.”

New heating, cooling, plumbing, electrical, and safety systems will also be installed, along with updated movie projection and sound systems with features for mobility-impaired, hearing-impaired, and vision-impaired customers.

C. Howard Crane originally designed the theater, which is expected to reopen in mid-2017 on the 75th anniversary of its grand opening in 1942. Crane, a Detroit-based architect, created Detroit’s Fox Theatre, Orchestra Hall, and Detroit Opera House, as well as Broadway’s Music Box Theater, August Wilson Theater, and Los Angeles’s United Artists Theater. The State Theatre is the only remaining design by Crane located in Ann Arbor.

In addition to the new State Theatre, the foundation will also use a portion of the funds to renovate the Michigan Theater, located at 603 E. Liberty St. These updates, which include new seating, improvements to mechanical systems, accessibility enhancements, updated historically accurate carpeting, and more, will take place in the fall of 2017.

Founded more than 89 years ago, more than 300,000 visitors visit the Michigan Theater each year.