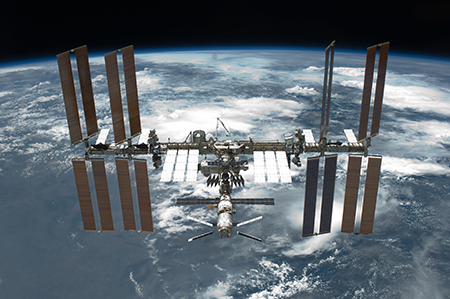 With increased demand for STEM professions (science, technology, engineering, and mathematics), students at Macomb Mathematics Science Technology Center in Warren and Elkton Pigeon Bay-Port Laker Junior High School in Michigan’s Thumb area are on track to fill some of those positions. After all, by the end of the year, they can add “Research at the International Space Station” to their resumes.

As part of the Student Spaceflight Experiments Program, teams from the two Michigan-based schools will join nine others across the nation as their microgravity experiments, which they designed and proposed earlier this year, are sent to fly in low Earth orbit on the ISS sometime after Dec. 15 (the exact time of the launch is predicated on good weather).

“This has been a real hands-on math and science initiative that has engaged students about pursuing STEM-related careers,” says Mark Supal, an interdisciplinary studies teacher at the Macomb Mathematics Science Technology Center.

The project seeks to find if a decalcified bone absorbs calcium in microgravity. In a proposal summary, the students say they were inspired to pursue the project given research has found that astronauts lose 14 percent of their bone density while in space. “If we could find a way to help sustain bone density, we could help astronauts’ health. This would also allow them to continue being in space without the problem of loss of bone density, which would reduce the risk of broken bones while in space and osteoporosis,” according to the proposal.

In addition, seniors at Macomb Mathematics Science Technology Center asked, “What happens to the formation of crystals in an environment with both increased radiation and microgravity?” To answer the question, the students will test if silver nitrate crystals can be formed in space, and if they have similar properties to the ones formed here on Earth.

“If our hypothesis is correct and these crystals that are grown in space have the same properties as those in our lab, they may show that the crystals, due to their porous and rigid nature, could benefit astronauts,” says Steven Prascius, one of the students working on the project. Earlier this year, The Chrysler Foundation, the charitable arm of Chrysler Group LLC in Auburn Hills, provided a $17,500 grant for the research effort.

More than 3,000 students (grades 5-12) across the country were formally engaged in the experiment design phase for Mission 4. At its conclusion, a total of 744 microgravity flight experiment proposals were submitted, with 11 were ultimately chosen to participate in the flight.

The launch will be shown live on NASA TV and on the NASA TV portal at the SSEP website.