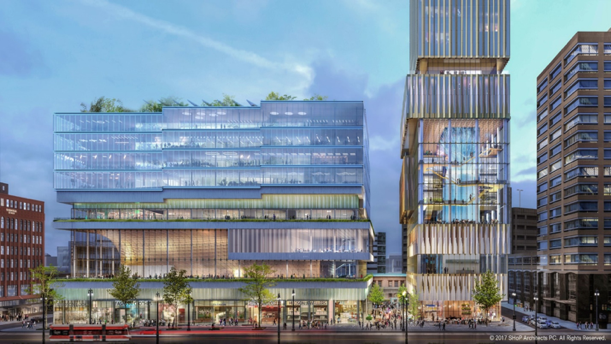 The Michigan Strategic Fund (MSF) today approved Bedrock’s use of the MIthrive financial tool, which clears the final hurdle for the company to lock in $2.2 billion in new investment in downtown Detroit among four different projects, including a major redevelopment of the Hudson’s site.

The MSF also approved a $4-million Michigan Business Development Program performance-based grant to Amazon to build a new fulfillment center on about 100 acres of land in Gaines Charter Township, which is in Kent County near Grand Rapids. The project is expected to generate a total capital investment of $150 million and create 1,000 full-time jobs. Gaines Charter Township is offering a 50-percent property tax abatement in support of the project.

Other projects that received incentives from the MSF include the Port of Monroe, several developments in Detroit — Bagley Forest Property, 609 E. Kirby Lofts, and Wolverine Packing Co. — along with the 618 South Main and 1140 Broadway Street Redevelopment projects in Ann Arbor, a Kroger store in Chesterfield Township, among other efforts.

Bedrock’s four projects include the redevelopment of the Hudson’s Site, the transformation of the nearly four-acre Monroe Blocks site in the heart of downtown Detroit, restoration of the historic Book Building and Book Tower, and the expansion of the One Campus Martius building, which will create new office space for an estimated 1,500 jobs.

“These landmark developments are a milestone representing Detroit’s credible new era of hope, optimism, and growth,” says Dan Gilbert, founder and chairman of Bedrock. “This process has been an outstanding example of collaboration between multiple levels of government and private industry that will unleash billions of dollars of investment, resulting in transformational impact to Detroit, the region, and the entire state of Michigan.

“Governor Snyder and the Michigan Strategic Fund were instrumental in getting these monumental projects to the finish line. I want to thank the Governor, MSF, and all of our local and state partners for their strong support and commitment to Detroit and the state’s transformation.”

Construction has already begun on the Hudson’s site and Book Tower. The Monroe project and One Campus Martius are expected to be underway later this year.

The Hudson’s Site and Monroe project will be the first 20-story-or-higher commercial towers built in downtown Detroit in more than 25 years.

The TIF plan will enable Bedrock to secure about $250 million in debt financing by authorizing the capture of an average annual $18.56 million in newly generated taxes across the sites over 30 years. The plan also exempts the state sales tax on construction materials used to build the projects, averaging a forecasted savings of $12.2 million per year over the expected five-year construction period. The TIF financing and sales tax exemption will cover about 15 percent of the project costs, with Bedrock responsible for 85 percent of the total $2.15 billion investment.

The plan will not capture City of Detroit taxes and will have no impact on the Detroit Public Schools Community District.

“The Michigan Strategic Fund’s approval of the MIthrive financing represents a major step forward for Detroit and other Michigan cities that are rebuilding,” says Detroit Mayor Mike Duggan. “Thanks to this new tool, we will be able to make sure these projects realize their full potential to create thousands of new jobs in our cities.” â€¨

Bedrock announced it would seek gap financing through the MIthrive program in September 2017. In November 2017, the Detroit City Council approved the MIthrive financing package.

“MIthrive poses an incredible opportunity for carpenters and skilled tradesmen across the state,” says Mike Jackson, executive secretary-treasurer of the Michigan Regional Council of Carpenters. “Bedrock’s four projects represent thousands of jobs for our union members, as well as tremendous opportunities for young people looking for a rewarding career in the trades.” â€¨

The MSF worked with outside consultants to analyze whether approving the TIF would be cost-beneficial for the state and whether it was necessary for the projects to be possible financially. University of Michigan economists estimate the Transformational Brownfield Plan will deliver a net tax revenue increase of a little less than $1.9 billion. The review also confirmed the TIF financing is needed to make the projects financially viable to help bridge the gap between development and construction costs and the market rents. The MIthrive law mandates a reduction of the incentives under certain conditions, if upon the projects’ completion it is determined that the construction and development costs are lower than expected.

Bedrock is a full-service real estate firm specializing in acquiring, developing, leasing, financing, and managing commercial and residential buildings. It was founded in 2011 and has since invested and committed more than $5.6 billion to acquiring and developing more than 100 properties.