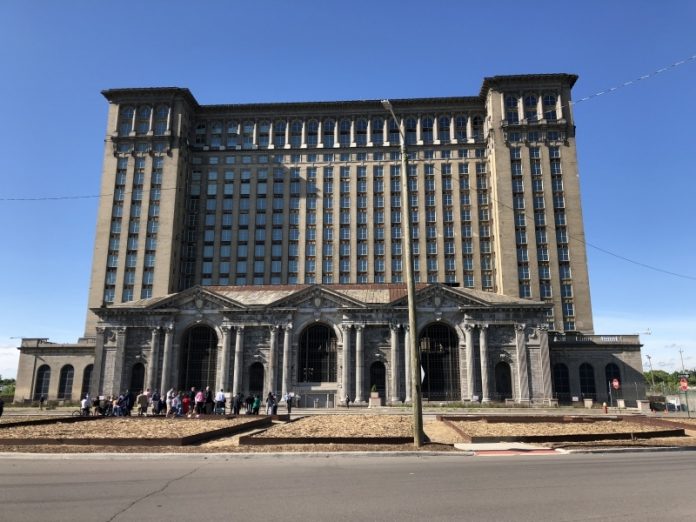 Ford plans to transform the historic, long-vacant Michigan Central Station and several adjacent properties into an innovation hub centered on the future of transportation, including autonomous and electric vehicles, and design mobility services and solutions for urban environments.

The station will be restored to its original grandeur and serve as the centerpiece of the campus as well as a mixed-use space for the general public. The project is expected to generate a total private investment of $740 million and bring 2,500 jobs directly with Ford, and an additional 2,500 jobs with Ford’s partners and suppliers.

“We are grateful for the decision by the Michigan Strategic Fund Board to approve the Renaissance Zone for Ford’s Corktown campus,” says Curt Magleby, vice president of government relations at Ford. “With the support and partnership of the State of Michigan, the City of Detroit, and Corktown residents, we can now proceed with this exciting and transformative project that will help Detroit remain at the forefront of mobility.”

The city of Detroit also has approved Commercial Rehabilitation Act and Obsolete Property Rehabilitation Act tax abatements in support of the project. The estimated value of the abatements is $27 million over 12 years. The DEGC estimates the project will provide $370.7 million in net fiscal benefit to the city of Detroit and other taxing jurisdictions.

Meanwhile, Aptiv US Services General Partnership, a global technology company that develops safer, greener, and more connected solutions enabling the future of mobility, plans to renovate its existing facility in Troy for approximately 500 engineers and support staff. Aptiv conducted a national search and narrowed its finalists to four states earlier this year. After a competitive process Michigan came out on top, beating states in three different time zones.

Aptiv is expected to generate a total private investment of $20 million and create 500 jobs over the course of the project, resulting in a 100-percent Good Jobs for Michigan tax capture for up to 10 years valued at $30.6 million.

The intention of the jobs-initiative package is to attract projects that result in a significant number of high-paying jobs with employees making more than the target regional wage. Good Jobs for Michigan allows the state to compete globally at a higher scale for transformational projects while also helping to further diversify the state’s economy.

“Governor Snyder met with Aptiv executives last year and made the case that there is no better place in North America for high-tech companies to expand and succeed than Michigan,” says Jeff Mason, CEO of MEDC, the state’s chief marketing and business attraction arm that administers programs and performs due diligence on behalf of the MSF. “Aptiv’s investment is a catalyst for attracting other technology companies and underscores the strength of the state’s high-tech automotive assets.”

“We’re excited Samsung SDI America has expanded its footprint in Oakland County and chosen Auburn Hills for its new technical center,” says Oakland County Executive L. Brooks Patterson. “The company, with investment of more than $62 million and the creation of 461 highly skilled positions, has clearly demonstrated its faith in our educated workforce and our county. It’s a strong vote of confidence.”

The City of Hazel Park Brownfield Redevelopment Authority received approval of $21.4 million in local and school tax capture to support a business development project that will involve the new construction of two speculative commercial buildings on a portion of the former Hazel Park Raceway site.

The project is expected to generate a total capital investment of $85 million and create 613 full-time equivalent jobs, and will bring an inventory of high-quality, readily available space for manufacturing companies looking to invest or grow in Michigan. The tax capture will be used to alleviate brownfield conditions at the site, making it suitable for redevelopment.

In addition, Gallagher-Kaiser Corp. in Troy, which provides engineering, procurement, and construction support including on-site solutions to its customers, primarily automotive OEMs, is one of the top paint finishing suppliers and also provides pre-finished steel equipment to be used by manufacturers.

The company is experiencing growing demands from its customers and plans to create a steel fabrication center of excellence (COE) at its facility in Detroit. The project is expected to generate a total private investment of $9.3 million and create 300 jobs, resulting in a $3.2 million Michigan Business Development Program performance-based grant. Michigan was chosen over competing sites in Indiana and Texas. The city of Detroit anticipates approval of a property tax abatement in support of the project.

Spartan Michigan, a joint venture between Glanbia plc, Dairy Farmers of America, Inc., and Select Milk Producers, Inc., plans to construct a 142-acre dairy processing facility in the city of St. Johns. The facility is expected to process more than 8-million pounds of milk per day and manufacture cheese and whey protein powder.

When completed, the mid-Michigan site will be among the largest dairy processing facilities in the country. The project is expected to generate a total investment of $425 million and create up to 259 jobs. The Michigan Strategic Fund today approved a $2 million Michigan Business Development Program performance-based grant in support of the project.

The project was originally announced in August, when the Michigan Strategic Fund board recommended approval of a 15-year Agricultural Processing Renaissance Zone by the State Administrative Board. The facility is currently under construction.

“We are excited to be underway with developing a new dairy plant in St. Johns,” says Glanbia Nutritionals Senior Vice President of Group Sustainability and U.S. Corporate Affairs John Dardis. “The continued support of MEDC, as well as the state and city authorities, has been a central component of our investment in Michigan.”

UP Paper, established in 1920 in Manistique, manufactures recycled kraft paper products sourced from recycled paper products. The company currently employs 97 people and is one of the larger manufacturing employers in the area. The company’s plant is at full capacity and plans to add four new full-time employees in the next six months and an additional four within the next two years. MSF is providing approximately $1.9 million in collateral support that will support its working capital line of credit from Crestmark, a division of Meta bank.

Heritage Tower BC plans to rehabilitate a long-vacant, historic building into an iconic and active mixed-use development in downtown Battle Creek. The completed project will consist of market-rate apartments and commercial, retail, and office space. The 19-story building is the tallest building in Battle Creek.

The project is expected to generate a total capital investment of $32.3 million and create 15 full-time equivalent jobs and will bring new residents and commercial business to the central core of the city, while acting as a catalyst for other investment in the downtown area. As a result, the project has been awarded a $10 million Michigan Community Revitalization Program other economic assistance loan and equity investment.

In addition, the Battle Creek Brownfield Redevelopment Authority received MSF approval of $2.4 million in local and school tax capture to be used to alleviate brownfield conditions at the site. Through a Program Related Investment by the W.K. Kellogg Foundation, Battle Creek is contributing a $5 million investment in support of the project, and has approved Obsolete Property Rehabilitation Act and Neighborhood Enterprise Zone abatements for the project valued at $3.1 million. Other local support includes a $3 million investment from Battle Creek Unlimited and a $450,000 contribution from the Battle Creek Community Foundation.

The City of Kalamazoo Brownfield Redevelopment Authority received MSF approval of $3.8 million in local and school tax capture to support the Catalyst 12 project in downtown Kalamazoo. The project includes the redevelopment of an existing surface parking lot into a seven-story mixed-use building that, when completed, will include office space and 49 market-rate and affordable residential units.

The project is expected to generate a total capital investment of $70.8 million and create 50 full-time equivalent jobs, and will bring increased density and vibrancy as well as much-needed residential and commercial space to the downtown. The tax capture will be used to alleviate brownfield conditions across the site, making it suitable for redevelopment.